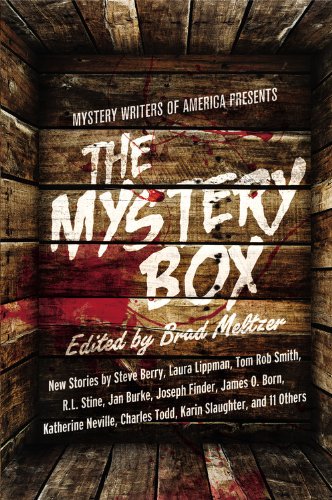 Brad Meltzer, reknowned author of mystery, including The Fifth Assassin and The Inner Circle compiles a delicious anthology of writers with one theme: THE MYSTERY BOX.

“There’s nothing more mysterious than a locked box. Whether it’s a literal strongbox, an empty coffin, the inner workings of a scientist’s mind, or an underground prison cell, there are those who will use any means necessary to unlock the secrets of…THE MYSTERY BOX.”

With 21 new stories from a list of today’s most prominent mystery writers, this is a book not to miss! Mystery is my genre; I love it. Each of these stories uses the theme in its own strange and unique way.

The Amiable Miss Edith Montague by Jan Burke: The sweet, kind Miss Edith Montague never has a mean word for or about anyone. When she is murdered, her only heir, her nephew Mr. Montague, discovers a hidden box, where his Aunt’s savage inner thoughts are shown. And the surprising murderer is found.

Waco 1982 by Laura Lippman: A young reporter stuck with a seemingly mundane assignment on lost and found boxes unwittingly discovers a dark crime.

Heirloom by Joseph Finder: A scheming neighbor frightens the new couple on the block with an unnerving tale of buried treasure.

High Stakes by R.L. Stine: A man on his honeymoon gets drawn into a bizarre bet involving a coffin, where he lies buried, waiting for death.

Each story, compelling and rich with tales of murder and horror, seep deeply onto the pages of these talented and world reknowned writers! A not to miss for all mystery and crime fiends! Like me!

is on bookshelves at your local stores now.