You are here: Home / Fun / DVD Reviews: Juan of the Dead 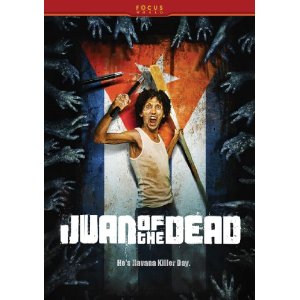 Juan of the Dead

This is the feature I never thought I’d get the chance to see.  I had heard plenty of buzz about it, but I really never though I would ever get the chance to see this Zombie Cuban film.  Juan of the Dead is the first Cuban Zombie movie ever made. Believe it or not this film is a big deal.  I love zombie movies and I love the way that Cuba looks so this film was built for me.  “Juan de los Muertos” is one of those pleasant (even with my anticipation for this film) surprises every day more difficult to find in the entertainment world.
Juan and his friend, Lazaro, wake up one morning to a Zombie invasion in Havana. Juan and his friends decide that they can make a successful small business by killing and disposing of Zombies. For a small fee Juan can dispose of your unwanted loved ones for you. So an unlikely bunch of heroes come together and arm themselves to rid the city of Zombies for a profit.  And all of this while trying to build a relationship with his adult daughter.
This movie is just crazy fun.   It’s a zombie movie wrapped in a propaganda film wrapped in a Cuban film.  Some scenes show the Cuban government is reporting that the Zombie outbreak is “Americans trying to undermine the Cuban government”. Obviously poking fun at the Cuban’s political propaganda. At the same time it really shows how proud the Cuban people are of their homeland.
The dialogue is quick too.  In one scene Juan is asked if he ever wants to paddle to Miami in reply he says “Why? I’d have to get a job.” Juan of the Dead’s strongest suit is its disparate cast of somewhat shady characters who still manage to be an extremely amiable bunch despite their dubious morality and, in some cases, a general lack of compassion for fellow human beings.
The special features were kind of weak.  We had a decent making of feature; it was actually a bit better than average providing some insight in to the production and motives behind the film.  There are also a series of deleted scenes that provide a bit more depth to Juan.  Also, a trailer is included.
What makes this movie special is that you get a real personal view of what it is like to live in Havana. The scenery is beautiful and sad at the same time. Havana is depicted as a place where Elevators don’t work, Medicine is outdated, and the people are proud.  While this is not as good as say Shaun of the Dead it still is my favorite zombie feature of the year.  If you like Romero style zombie action this film is for you!
Juan of the Dead

is available online and in stores.

Ratings are based on a 5-star scale
Overall:  4 harpooned zombies out of 5 Review by Bro’ B – BenWe received product for our review. All opinions are our own