You are here: Home / Fun / DVD Reviews: A Girl Walks into a Bar 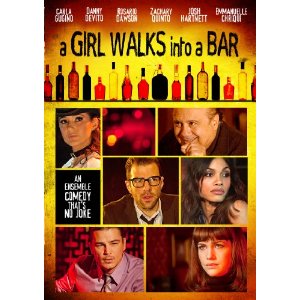 I really like Sebastian Gutierrez and not because he makes good movies, it’s because he makes movies that actors and actresses look like they have fun making. I don’t know what it is but you can tell that everyone on screen is having a great time. I have really enjoyed Gutierrez’s past two features while they were both hit or miss scene by scene they were both very fun date movies. Women In Trouble was one of the first features I had the opportunity to review and it proved to be a date favorite. So is this one as good as the rest?

We will find out after the synopsis…

A dentist teams up with a feisty would-be assassin to put the final touches on the plan to kill his wife. Once he makes a play for the assassin’s payment, he unknowingly sets off a chain of events that fuels a cross-town journey through the many lounges, bars, strip clubs and the occasional nudist Ping-Pong club scattered across Los Angeles. Along the way, we are introduced to a series of idiosyncratic characters, from gangsters to exotic dancers, from ex-cons to cops, with the odd hatcheck girl and bartender thrown in for good measure.

So how was this film? It was Ok. It felt like it was trying to do the ensemble Altman thing and that just wasn’t working. But some scenes hit and some just fall flat. Considering the main plot of the film is only about 30 minutes long and shit just kind of happens throughout the film faired very well in my eye. Normally a film structured like this would infuriate me be here it was just mildly distracting.

The spoken dialogue is the real winner here. All the voiceover is crap but when the director gave the actors the opportunity to deliver they did. Carla Gugino nails every scene she is in, as does Zachary Quinto. The real star here is someone I had never noticed Aaron Tivet who has great screen presence and delivery. Other parts of the film play as a sophomoric series of silly skits without purpose.

There are also a few interesting things about the production here. The entire film was shot on a Cannon 7D which is amazing because it is such a low cost camera. This gives hope to many independent filmmakers looking to make something on a budget. Also this is one of the first films to be show on YouTube for free as a digital premiere.

Overall the film was short enough to overlook many (and there were quite a few) of its shortcomings. This film snuck past an awful rating on charm alone. Most of the dialog is clever, well written, and delivered by good actors. It’s unrealistic and fast paced, with no time between a line and the response to that line. This is good entertainment, but if you get bored by dialog you’ll get bored fast–there’s no action here.

is available for purchase on Amazon.com and other  DVD retailers.

Overall:   3 naked ping pong players out of 5
Review by Bro’ B – Ben
We received product for our review. All opinions are our own