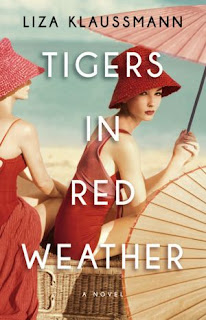 Sultry, seductive Nick and her blonde, fragile cousin Helena have spent all their summers at the family’s Martha’s Vineyard compound, The Tiger House, since they were young children. It is the end of World War II, and Nick and Helena’s lives change, from the carefree lifestyle they share as roommates in their apartment, having fun, and drinking gin. They are both exuberant and happy for Nick is to marry Hughes, a naval lieutenant and Helena, whose first husband, Fen, has died in the war, will marry Avery and move to Hollywood. The cousins, both close and yet distant, are opposites: Nick craves adrenaline adventure, while Helena simply wants to “belong to a man.”

However, as their lives diverge, both women find themselves unhappy. Hughes has come back a ghost, and cannot let go of what he has seen and experienced. He wants a steady, proscribed life, a wife who will show off her domestic skills and beauty. Nick realizes that she has to give herself up to create what Hughes must have.

Helena, always fragile, finds she has married a man who only wants Helena’s money, and she falls into a deep denial and supports Avery’s insanity, for he is indeed insane. He spends his entire life trying to replicate Ruby, an actress who died young, and whom he is obsessed with. Helena ignores any reality and becomes as insane as Avery.

As Nick gives herself up to Hughes needs, she becomes the perfect hostess and agrees to have a baby against her own wishes. But Nick’s passions will never submit to safety. Daisy, her daughter, the golden child who looks exactly like Hughes, is caught in the middle. Helena sloughs off her sanity and refuses to see that Ed is odd. Finally, Helena loses her cottage next door to Tiger House when Avery has made Helena a prescription drug addict to manipulate her. Ed, loyal only to Daisy, acts out both Avery’s and Helena’s insanity.

In the 1960’s, back at Tiger House with their children, Nick’s Daisy and Helena’s Ed, the women watch as their children grow closer and closer. Daisy is delightful, but Ed is on the brink of becoming a psychopath, stranger than his father. Then something goes terribly wrong, when a young Mexican girl is found murdered and mutilated the summer Daisy is 12 and Ed is 13. Tightly wound, Tigers in Red Weather stuns as Nick, Hughes, Helena, Daisy and Ed reveal their secrets and the betrayals of family in five point of view narrations.

Hughes, however, is as strong as Nick in his own way, and protects his family against Helena and Ed as best he can. Full of the flavor of Martha’s Vineyard and the rich families that find their comfort in appearances, everything cracks in a tempestuous ending.

A compelling novel of families and the deep cracks that define them, Tigers in Red Weather is rich and complex, with characters that reveal their human frailties as well as their strengths.

Overall: 3.5Review by Broad “A” – AvaWe received a copy of this title for our book review. All opinions are our own.