You are here: Home / Fun / Books / Book Reviews: Shake Off 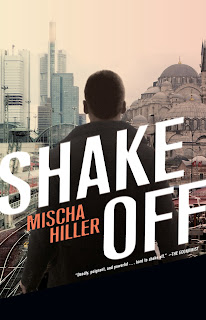 Michel Khoury, born in the Sabra refugee camp in Beirut, watches as his entire family is murdered. His father’s dead body covers him, blood gushing, and Michel can hear the screams of his mother in the house, and can do nothing. Now, he has many passports, and tapes thousands of dollars to newspapers which he carries under his arm. He speaks Arabic, French, English, German, Lebanese, Dutch – a plethora of languages. He answers only to his mentor and substitute father, Abu Leila. Abu warns him to be wary of the Mossad. Michel believes that he is a PLO agent, in London to find a site for Abu Leila to organize Palestinian and Israeli peace talks. He attends the School of Oriental and African studies in Kentish Town, London and lives in a bedsit. He is used to being anonymous, for he has been trained by the KGB in the rules of secrecy and intelligence.

After his family was murdered and he was sent to the camp, Michel at fifteen is eventually adopted by a Palestinian family who are generous to him. They do not get close to him, and the entire family is often visited by Abu Leila, who takes Michel under his wing, and has him trained to “revenge his family.” Michel only wants peace to enter the Middle East, and follows Abu’s every order. Now, Michel is a courier, helping Abu Leila by traveling to different countries with envelopes, equipment, money, cash, names and addresses he has to secretly code, and other documents. Michel does not exist as Michel; he can get close to no one. He hides everything under the pipes of the bathtub in a plastic bag, for he has been trained to never have anything in his room in case he is caught. All Michel knows is that he is an agent for the peaceful resolution of the Middle East Conflict.

When he and English Helen, his neighbor, start to get close, Michel thinks only of the documents he has hidden, what he cannot tell Helen, how dangerous it is to be attracted to her.

And then he discovers the truth, when Abu Leila is killed in Berlin, and he and Helen run for their lives through England, Germany and Scotland. For the intense training that has turned Michel into an intelligence agent has turned on him. He’s working for the wrong side.

Sentence by sentence, Mischa Hiller delivers a taut and psychological tale of tragedy, deceit and survival, as well as the human condition, as he delivers his character Michel from the intense brainwashing he has absorbed. Michel is a character of incredible courage he realizes that he does not know who he is, but through Helen he can embrace life and find out. Brilliantly portrayed through the eyes of an orphaned boy who knows brutality first hand, Michel carries loss and sadness, yet still seeks love.

This is not just a novel of point of view, or spies, or the Middle East, or betrayal and loss. Hiller’s tender portrayal of Michel’s cornered and destitute life brings us to the point of seeking who we are, and the courage that it entails to search in spite of all obstacles. Perfectly written, poignantly portrayed through a character that, like all of us, seeks to know who and what we are, Mischa Hiller’s Shake Off vibrates like a tuning fork. Not your usual spy thriller – Hiller one ups the genre. As we glare at the reality of the conflicts in the Middle East that confuse all of us, Shake Off is a must read – if you can allow your heart to break, bleed and reintegrate. An unforgettable novel.

hit book stands this week and is available on Amazon.com as well as locally.