You are here: Home / Fun / Books / Book Reviews: Me who Dove into the Heart of the World 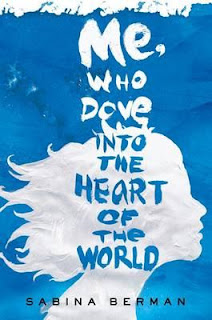 Me, Who Dove into the Heart of the World
Author: Sabina Berman

Sabina Berman delivers an event with her debut novel, Me Who Dove into the Heart of the World. Mesmerizing, Berman’s undulating prose stops us at the edge of the sea, as the sea salt sprays against her characters and pierces mind and heart. Poetic, lustrous, with a tidal tenderness both ferocious and ascendant, Berman presents Karen, or Me, as Karen calls herself.

The scent and taste of sea surround Karen, a feral child who lives in the basement of her mother’s decrepit French mansion in Mazatlan, Sinaloa (Mexico). In the basement, feral Karen has cut a hole in the wall that allows the sea into the filth that surrounds her. Born dimwitted, or so Lorena Niento, her mother, thinks, Karen has been horribly abused by Lorena while the fat housekeeper Gorda ignores the abuse. Scarred and starving, the child eats sand and wanders about the seashore property, while Lorena runs Consolidation Tuna, a fifth generation tuna cannery and fishery. When Lorena has a stroke and decides to drive herself off a cliff rather than function imperfectly, Lorena’s sister Isabelle flies in from California to address the estate left to her by Lorena. The sisters were estranged and Isabelle almost faints as she arrives at the concrete tunery buildings filled with flies and Mexican women standing in blood and filth gutting tuna in the horrible heat. When she discovers the child Karen, and questions Gorda, Gorda tells Isabelle of Lorena’s abuse horrible and sadistic abuse of the child.

Isabelle decides to find the human inside the feral child. She spends hours teaching Karen her name and the words and context of Me and You. Karen is not brain damaged; she is an autistic savant. When Isabelle has her tested, Karen tests in the idiot range in most things, but in the genius range in organizational skills, a literal thought process and photographic memory, and she has many abilities, like not being able to lie. Isabelle puts her in the only school available, one for disabled children, but Karen does not fit. She is not one of them. So Isabelle decides to teach her on her own and to take Karen to the tuna cannery every day so Karen can learn. At the tuna cannery, Karen learns to dive from the fishing boats, and realizes that her true love is the sea and the creatures who live there. In the meantime Karen has gone to college to learn animal husbandry but does not finish, due to Professor Charles Huntington (renowned for his book Killing with Compassion) who wants her to intern for him so that he can take advantage of her photographic memory and keep her from revealing his own immense cruelty in his pig farm. Karen tells him off and leaves the university.

The reader cannot help but fall in love with Karen, the novel’s narrator. As Isabelle realizes that the cannery is going broke because of political embargoes that refuse to allow her to ship to the US, she sells half the fleet of twenty ships and lays off half the workers. And then a businessman, Mr. Gould, of the Gould Trading Company, comes to the door and tells them that Karen’s idea, to kill the fish without cruelty, is genius, for then the fish do not release the toxins that spoil their flesh. And to deliver the fish fresh without freezing retains their flavor. Gould offers to partner with Isabelle and change the yellow fin tuna to blue fin tuna, attracting the Asian market for sushi. The change demands a move across oceans to the island of Nogocor in the African Mediterranean, but Isabelle sees no alternative. And the move is unbelievably successful. Gould markets blue fin tuna belly – toro – into a Tokyo success and renames the company True Blue tuna. True Blue flies the tuna in fresh and turns the delicacy into the Promised Land. True Blue becomes the premium seller of toro, and the money flows in. And Isabelle creates a majority share between herself and Karen in the partnership.

As Karen watches her beloved Isabelle die, she chooses to change the nature of the cannery, and to overcome Gould’s greed and partnership. She sets out to fulfill her need to not kill anything, and to change the focus of the cannery from profit to paradise for the tuna that rely on her care. And she battles Gould fiercely.

Very seldom are we so drawn into a world both succulent and stark. When we are, we take every word into our breath, our senses, and cherish them, roll each word on our tongue. Berman presents in Karen a character so real, so direct, and so able to convey her meanings and thoughts that we move inside the novel along with Karen, who refers to herself always as ME. It takes a special talent to insert a reader into her novel, and Berman does so with ease. Funny, courageous and heartbreaking, breathlessly relevant we read with great joy as Karen devours our preconceived notions about autism, differences in abilities and learning, human arrogance of the beauty and intelligence of animals and the Earth, and the greed and busyness that makes us, perhaps, the lowest mammal in the food chain. Karen attacks the violence that she sees, and reveals the true nature of life. For Karen hates Descartes, who claimed We think therefore we Are. Karen knows We are then we learn to Think.

A brilliant novel on many levels, Berman creates a palette of thought, an appreciation of what we are and what we could be through Karen. Stirring, primal, relentless and profound, Me Who Dove into the Heart of the World is a remarkable treatise on life in the natural world, as well as a novel so well written that it is hard to put down. Absolutely a wonderful story with characters that throb as the ocean contains them.

Me, Who Dove into the Heart of the World   is available for purchase on Amazon.com and bookstores everywhere.

« View from a broad: Angina
Household Product Reviews: Country Save »