You are here: Home / Fun / Are you Pitch Perfect? 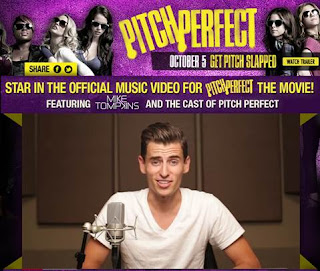 Broad A will tell you that I can’t carry a tune. She’s wrong…dead wrong. I know for a fact, because I can belt out a tune that would make Streisand WEEP…just come into the shower with me and you’ll know. WAIT! I DON’T WANT YOU IN THE SHOWER WITH ME. You’ll just have to take my word for it (and hope that I never have enough drinks in me to get up and sing at a karaoke bar).

Seriously, I hope you’re better at it than I am. If you’re an amateur singer, dancer (wait, I can do that), or beat boxer you’re in LUCK.  Universal Pictures’ comedy PITCH PERFECT is offering a contest where fans like YOU, can have a chance to star in a music video alongside the film’s cast and YouTube sensation Mike Tompkins, performing an a cappella cover of the Nicki Minaj hit “Starships.”

Here’s how you can enter ~

Submit your entries at http://www.pitchperfectmovie.com/musicvideo by August 22nd
Oh, and the winner’s video will also be featured on the blu-ray DVD of the movie when it gets released. You’d be a STAR!

Beca (Anna Kendrick) is that girl who’d rather listen to what’s coming out of her headphones than what’s coming out of you.  Arriving at her new college, she finds herself not right for any clique but somehow is muscled into one that she never would have picked on her own: alongside mean girls, sweet girls and weird girls whose only thing in common is how good they sound when they sing together, in the new out-loud comedyPitch Perfect.

When Beca takes this acoustic singing group out of their world of traditional arrangements and perfect harmonies into all-new mash-ups, they fight to climb their way to the top of the cutthroat world of college a cappella.  This could wind up either the coolest thing they’ll ever do or the most insane, and it will probably be a little of both.

Loaded with new takes on old favorites to hits of right now that are seamlessly mixed together, mashed-up and arranged like you’ve never heard before, Pitch Perfect is directed by Jason Moore, who opened our eyes to the very misbehaved life of puppets in the surprise Broadway sensation Avenue Q.  www.pitchperfectmovie.com