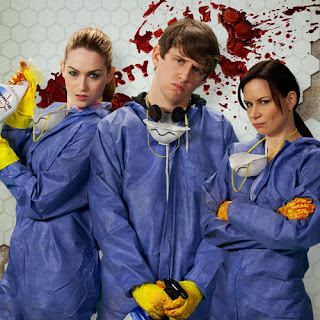 Dirty Work
Until recently, I hadn’t really “gotten in” to any of the web TV show and series.  I don’t really dig sitting behind the computer to watch a program.  That being said, web based programming has improved a LOT (just look at Mythomania and Burning Love).   Truthfully, they are two of the three I’ve watched, but they all have been pretty good.
However, Dirty Work really sets it self apart from the others!
Synopsis time

Dirty Work is a dark comedy that follows the gruesome misadventures of a Los Angeles based crime-scene clean-up crew. Each episode finds our team wading through the muck of a new assignment, a new location, and new set of toxic predicaments. Calling themselves “bioremediation engineers” is a just a fancy way of saying they scrape up brains for a living. But the carnage they’re mopping up is nothing compared to the wreckage of their personal lives.

How does this show set itself apart?  First of all, they make it fun for people like me with short attention spans.  The Rides.TV interactive experience directly connects to my phone so when a character on screen got a call I did too.  There are a ton of fun little interactive things like that going on, and while the interactive part makes the show fun it doesn’t necessarily need those gimmicks.  It’s a great show on its own.  As a matter of fact, this is a show I’d expect to see on FX or Showtime. The fact that I can watch it whenever I want on Ride.TV, just makes it better. 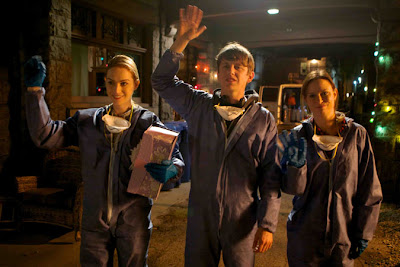 The premise of following the adventures (or misadventures) of a crime-scene clean-up crew is fun and the characters are well developed and great fun as well.  Dirty Work really rides on the character banter.  The jokes are funny, and I’ve been watching it on my lunch breaks at work – howling with laughter in my cubicle.  It’s a nice break but probably NSFW (good thing I work by myself).
While the show stands on it’s own and doesn’t need gimmicks, the personal interaction does enhance the viewing experience. I have to say that each of the three episodes have been funnier than the previous ones, and the characters become more and more interesting.
The third episode is particularly hilarious (I won’t give anything away, go watch it as soon as you finish reading this review), but they all really have their moments.  The principal cast is so good that every scene of the show works.  The cameos are great, especially Kid Creole’s moments. I am really hoping that this takes off because the first three episodes are fantastic.
Dirty Work may be a web series but the acting writing and directing are all up to snuff with television quality. I can’t wait to see MORE.


Dirty Work is available for watching on rides.tv – make sure you have your phone handy, because you’ll want the ENTIRE rides.tv experience (it truly enhances the show).

5 corpses out of 5 Review by Bro’ B – BenWe received product for our review. All opinions are our own
« Toy Reviews: Cuddleuppets
Sneak peek DVD: Hunger Games »