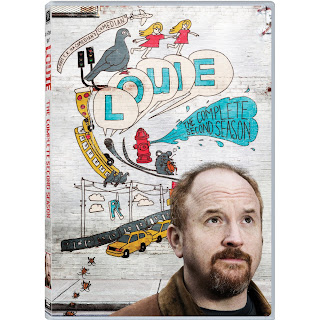 Louie Season 2
If you follow me on Facebook and twitter you will know how much I love this show!  It is without question the most honest show on television.  It really is not even a comedy to me.  It’s just a bright shining ball of honesty with some really comedic beats.  I have found however that many females don’t like Louie’s humor.  They just think he’s kind of an asshole.  The show is about hard truth not an easy laugh.
For those of you who aren’t familiar Louie is Louie C.K. playing a fictionalized version of himself, a regular-gigging comedian and divorced dad just trying to raise his two daughters.  Simple enough?  It never is.  While the shows family moments make him the most relatable person on television his love life is absolutely hilarious, well even that makes him show his heart.
I really don’t see this show as a comedy it’s a drama that’s really funny.  What’s funny about a single dad unintentionally f*cking up his children any chance he gets?  He genuinely loves them.  He genuinely confronts how life is so unfair but not in a bitter way, in the same whys you can laugh at weird shit in your own life.  Maybe his fears are more relatable to men and that’s why any woman I have seen this with has genuinely hated him.
Maybe people expect a cliché sit-com scenario?  I don’t know.  All I know is that his relationship with Pamela Adlon is one of the most true and beautiful unrecrpicated love stories since The Apartment.  Its genuine filmmaking (yeah I said it) that makes this show the best on TV.
Don’t get me wrong there are some serious laughs such as the PTA mom who just wants to be spanked, racist family members, and a duckling on a USO tour.  Chris Rock’s cameo is one of my all time favorite episodes of the season but I really could say that about any episode.  Its impossible to narrow down a favorite episode because they are so good.
The only weak point of this release is the special features.  There are 5 episode commentaries (so weak) and some clips from the red carpet premiere.  Fortunately the sound and audio on the Blu-ray are fantastic!
I’ve said it enough times now.  Louie is the best show on television.  It is honest, funny and moving, all at the same time.  It gets better and better as you watch.  The show is pretty daring with its subject matter but it pays off in spades.  Buy this show now!

Louie Season 2 is available at Amazon.com, and lots of other places!


Overall: 5 out of 5 hell with a snarky rating.