You are here: Home / Fun / DVD Reviews: Get the Gringo 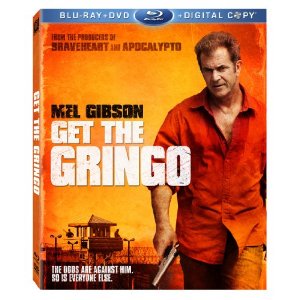 I know I’m supposed to hate Mel Gibson, but the hell with that; I’m better than that, I f*cking love Mel. Honestly, how can you not love him?I know, some people are racist and beat their wives, but that doesn’t make their movies sh*tty, it just makes them bad people. I will never stop loving Mel Gibson’s films. I don’t know how many times I have seen Payback, Lethal Weapon, and Mad Max. I honestly think that Mel shaped American action cinema, we now model all of our action characters after his performances (just look at Shia “The Beef”). So was I excited for Get the Grino? Hells yes…


What is Get the Gringo? It’s basically a spiritual sequel to Payback. If you love Payback, like me, go out and buy this movie right now. The plot is quite simple: a career criminal (Mel Gibson) nabbed by Mexican authorities is placed in a tough prison where he learns to survive with the help of a 9-year-old boy. Basically we have Payback in a prison and that’s that.


I would have loved to see this film a couple years ago when his comeback began (with Edge of Darkness). This is the perfect feature for Mr. Gibson to say, “Hey, I’ve still got it.” Gibson really does what he does best here – charm, wit, humor, and edge.

Now that you know I love this film – I’m about to get deep with it. The direction here is amazing. I’d never heard of Adrian Grunberg prior to Get the Gringo, but he definitely likes the same movies I do. The film’s visual style has a very Peckinpah feel to it. I am eagerly awaiting any movie you make next Mr. Grunberg! The gritty tone of this one brings the somewhat simple idea to life delivering one of the best action films in some time. The pacing is fantastic here too.

Unfortunately, due to Mel’s troubles it looks like no one was rallying behind this movie. The audio and visual quality are both good but not great. The special features leave a lot to be desired. There is a “making of” feature that was ok, and three “on-set” features that did nothing for me.


By now you know that I 100% like this movie. Get the Gringo is fun like the Lethal Weapon and Payback films that we grew up on. I’d like to see MORE features with this character, as he is the perfect anti-hero that we got used to seeing and love. It’s the kind of popcorny action entertainment that made us collectively fall in love with Mel in the first place. The movie was not perfect, I’ve seen the same type of plots and McGuffins a few times before, but do I care? NO! This is the action geek stuff I loved as an adolescent and I was just as gleeful watching it today.

Go out and get, get, Get the Gringo