You are here: Home / Fun / DVD Reviews: Friends with Kids 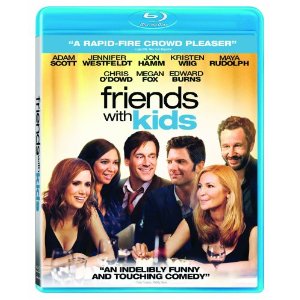 I really did not know much about this movie when I walked into it.  I was excited to see the cast because they are all fantastic.  Then I just realized it’s the cast of Bridesmaids with addition of Adam Scott, Megan Fox, Ed Burns and Jennifer Westfeldt (who also wrote and directed it).  I had previously really enjoyed Jennifer Westfledt’s Kissing Jessica Stein (that she so-wrote) but Friends With Kids is a different beast.  A film that I’m still not entirely sure what to make of.
The picture is about close-knit circle of friends whose lives change once they have kids. The last two singles in the group (Westfeldt and Scott) observe the effect that kids have had on their friends’ relationships and wonder if there’s a better way to make it work. When they decide to have a child together – and date other people, their unconventional ‘experiment’ leads everyone in the group to question the nature of friendship, family and, above all, true love.  So this should be When Harry Met Sally and had a baby.  Unfortunately it is not, but I’ve never sat through When Harry Met Sally in its entirety.
Ok…This movie kinda pissed me off.  The writing, directing and acting were never really clicking at the same time.  There were stretches where the writing and acting were good, however the direction really did not do much for me.  The plot was ripped directly from romantic comedy land but the tone was hard drama.  It tried to hard to feel real.
First, the cover says comedy in bold face font on the front cover, however it is not.  It is a drama that tries to be a dramedy.  But unfortunately the actors all are delivering like they are in a comedy the whole time.  It was obvious the cast of 40 something actors had trouble nailing the tone of the movie after walking off the set of Bridesmaids.
Jon Hamm is kinda amazing and terrifying at the same time in this film in a particular post empire performance.  I could also watch Chris O’Dowd do just about anything and laugh very hard.
The special features here are great.  The commentary was fantastic.  There is a standard making of feature.  We get a great segment of Megan Fox teaching Adam Scott how to play video games and an overly long blooper reel with separate reels for the kids and adults.  Also, a series of well cut scenes.
The film script and direction (there was nothing going on behind the camera) were really weak.  It was trying to be funny, sad, real, smart, and touching (The things that Nora Ephron and Nancy Myers does amazingly).  Unfortunately, trying doesn’t count Friends with Kids falls into all the romcom pitfalls without all the enjoyment of a romcom.
Friends with Kids is available for purchase at DVD & Blu-Ray retailers