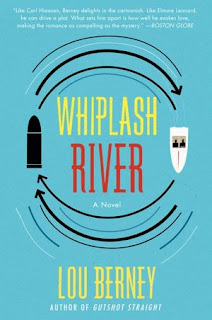 Whiplash River
Author: Lou Berney
Picture Carl Hiaasen on testosterone, with a little mix of The Godfather and I Love Lucy, and you get the gist of Lou Berney’s newest sensational novel, Whiplash River.
Charles Samuel (Shake) Bouchon, two times imprisoned for grand theft auto (he was only the driver) decides to go straight and buys a decrepit restaurant in the Caribbean that sits in a location no one wants to visit.  As he watches the view off the veranda of the Sunset Breeze in Belize, he’s hoping someone will wander in to taste his sumptuous lobster with a creamy lime sauce because he’s in hock up to his eyeballs for the restaurant – to Baby Jesus, a drug lord who kills people who make late payments.  He notices that a few customers have come in, one a honeymooning couple and the other an older man who sits alone.  Suddenly a man in a black ski mask enters the door and starts shooting to kill his elderly customer.  Shake decides that is not going to happen, and lunges at the shooter breaking his nose.  The shooter runs and the elderly man, a strange guy named Quinn, becomes his new best friend.  He takes a walk on the beach to try and figure out how he’s going to make his payment to Darth Vader and suddenly a tiny girl with freckles is pointing a gun at him – and shooting.  Behind him, a shot rings out and the freckled girl runs.  Shake turns and meets Evelyn Holly, FBI agent, and she smiles.  Only Shake doesn’t know that Evelyn is in the FBI and stalking him so that he will fudge on the Armenian mob, Shake’s ex bosses.  As Shake looks at beautiful Evelyn, he remembers his ex-girlfriend, Gina.  He left Gina because he was terrified Gina would leave him first, and now he’s stuck with a shot out restaurant, a drug lord, a masked shooter whose freckled girlfriend seeking revenge for a broken nose, and a pair of honeymooners who hate him.
Then, as Evelyn and Shake watch, his restaurant explodes in front of him.  Quinn comes to the rescue (he has an operative past as he tells Shake about all his escapades, which Shake believes came from Quinn reading too many novels) and gets Shake off the island to Mexico because he can’t pay Baby Jesus.  Quinn talks him into a con job in Egypt and they fly to Cairo.  They are going for the heist of the century.  It seems that there’s a man Devane that collects oddities and sells them for big bucks – millions – and he’s in Cairo holding Teddy Roosevelt’s written speech that Teddy had in his jacket when a bullet went to his chest – the speech literally saved his life, and it’s up for the highest bidder.  Enter Gina, who now owns an investment company with the millions she and Shake made in a past heist, and who wants revenge on Shake – no one, absolutely no one – has ever left her before.  Shake, Gina and Quinn set their sights on the collector while Evelyn chases to Cairo to get her man – Shake.  She needs a promotion and wants the Armenian mob – and Shake has the goods~!  However, the masked hit man who was supposed to kill Quinn in the first place is shot and his girlfriend is still after Shake – she joins the chase too!  Like A Mad, Mad, Mad, Mad World, this novel circles around as nice guy Shake just wants to get Gina back – and put a ring on her finger.
As Shake, Quinn and Gina pull off the heist, everything goes every which way.  Fast, furious, with characters that spike higher than the scatterbrain action, Berney has a hit on his hands with Whiplash River.  Ferociously funny, endearingly romantic, annoyingly buzzed, slapstick and chaotic, Shake Bouchon and his friends end up in jail – an Egyptian jail – for stealing Egyptian antiquities (well, Devane had the speech in Egypt…).  Will they ever get out?  It’s really up to Quinn’s strange relative who shows up for a bounding ending.  Well worth the read, Berney has written a mad dash crime novel with a sumptuous (but lethal) love story!  Totally insane.  I loved it!
Whiplash River arrived on bookshelves last week. Grab it at your favorite bookstore.