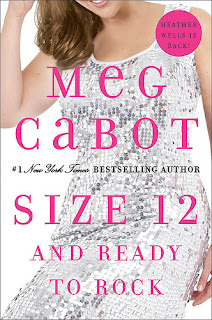 Size 12 and Ready to Rock

Silly, fun, and – MURDEROUS! Heather Wells is back! An ex-Britney Spears, Heather gained a few pounds, found her boyfriend Jordan getting it on with her replacement, tiny Tania Trace (who Heather has to admit has more talent than she ever had) and the stage is set for the second novel in the series.

Heather has now become an assistant resident hall director at New York College, Fisher Hall. Her staff, Jamie Price, Gavin, Sarah Rosenthal and her new boyfriend Cooper help Heather as best they can while Heather waits for a new Resident Hall Director to be announced. The last one died. Also, Fisher Hall is known for its deaths – her Hall is called the “Death Dorm” and Heather is determined to fix that! It’s summer break but Heather is astonished when she sees an ambulance at the Dorm – with a very pregnant Tania Trace (now married to her ex-boyfriend teen rocker Jordan) – on the gurney with Jordan following, covered in blood!~ Not on her watch! And to make things worse, Jordan Cartwright is part of the Cartwright family, the family at the head of New York College. And the most dysfunctional parents Heather has ever known. They are all nuts. Now Grant Cartwright, Cooper’s and Jordan’s dad (yeah that’s right, Heather is now going with Jordan’s brother, Cooper Cartwright) decides to use Fisher Hall to hold the first Tania Trace Girls Rock Camp on summer break – and the dorms are filling up with teenage rock wannabees with their stage mothers. Yikes. On top of that, Grant is having Jordan and Tania filmed for their reality show, with the two newest teenage heartthrob singers on stage – at every moment. On Heather’s campus. Enter Stephanie, the bitchy producer, and Lisa, the new Resident Hall Director, and Heather is losing it, fast.

As Heather gets the estranged brothers to reunite in order to save Tania, she realizes how much Cooper matters to her. But what a ride in the meantime!

Zany, irreverent, and full of rock star blues, Heather, Cooper and their crew face down a murderer and learn that parenting can be – dangerous. A raucous parody for young adult readers – and a great Mom beach read – Fisher Hall will never be the same. Until Heather’s next adventure.

Size 12 and Ready to Rock hit bookshelves this week. Look for it wherever you buy your books or via Kindle at Amazon.com