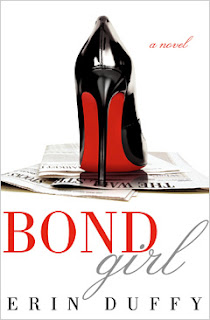 Bond Girl
Author: Erin Duffy
*****A Review Broads Picks of the Month*****
Ingenue invades Wall Street.  Picture Holly Golighty in Jimmy Choos. Settle down in your naugahyde barcalounger with a glass of pinot noir with a bar towel.  The bar towel is for when you spill your wine laughing the springs out of the chair (thank goodness the chair is naugahyde!)  One of the funniest and yet real novels I’ve ever read, Bond Girl shows the reality of bond trading, with Alex Garrett falling all over her 4 inch stacked heels.
Bond Girl’s a charmer.  It’s 2006.  Alex Garrett, fresh out of UVA, follows in her dad’s footsteps – well, Dad was a Wall Street “banker” – Alex is a lowly first year analyst in bond sales.  As Alex teeters into Cromwell Pierce on her first day, she’s handed a folded chair with “Girlie” in whiteout on the back and told by Boss Chick to keep her mouth shut, sit behind the horny guys, and absorb the job of big money bond sales.  The only other woman on the floor is well named as Cruella – she hates Alex on sight (she hates everyone).  And so Alex begins her career as Girlie.  And the job is insane.  Her friends Annie and Liv, her roommate, can’t believe she’s putting up with sexual harassment, verbal abuse, and having to pick up 100 pizzas and a 1,000 pound Parmesan cheese wheel – only to make 20 trips from the lobby to her floor to deliver them – herself.  She’s the bat slave on the floor – but Alex has True Grit.
Spontaneously combusting, Bond Girl torques into one of the funniest and original novels this side of the financial debacle created by Chick and his motley crew of gross geek guy sidekicks.  With insider trading (author Erin Duffy spent ten years in bond sales herself) Alex’s crew and their insane escapades brings us into the lucrative setting of one woman in a man’s world who wins.  Alex slugs down the lychee martinis with the guys, and keeps up with them.  She supervises for an entire day as Mangia Marchetti, her co worker, downs the contents of the vending machine for a $28,000 bet – that he wins.  She falls in love with low ball co-worker Rick, and then reads his engagement announcement in the Boston Herald, while he’s still dating her – who knew?  And then she goes from analyst to associate with a $110K BONUS – and she gets her name back.  Alex is one of the guys.
Absolutely charmingly entrancing, with a good view of the financial downturn of 2008, Duff combines truth with fiction – and the fiction is less believable than the truth~!   We follow Alex in our Reader folding chair as and watch her dilemmas:  Chick, the ruthless boss who always has her back, the firm’s biggest married client who stalks and tries to destroy her when she won’t have sex with him, the day Alex makes the biggest mistake ever and costs the firm $90,000 – and yet, Chick’s always with her.  Alex’s bond sales cohorts give us a ride unequalled in the high finance world of  money, booze and Gucci loafers!  Grab the bottle of pinot and throw away the TV – Bond Girl is all you need for maximum entertainment at nice girl Alex Garrett’s expense.  A classic, terrifyingly real, hysterically funny novel about Wall Street’s own!  Alex learns the ropes, grows up, and cries when Chick gets fired.  She walks tall, still laughing at herself and the crew at Cromwell Pierce, as she goes clicks on those towering heels  – to better things.
Duff has given a magnificently human account of money, greed, loyalty and the financial crash of 2008 – in one character’s amazing roll with the dice.  Don’t miss this one.  It’s faster than a speeding bullet, and makes Superman blink as the woman gets the prize!
Bond Girl arrived YESTERDAY to bookstores nationwide. Don’t wait to buy this one