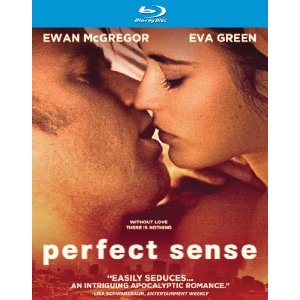 Talk about an amazing concept for a movie!

Conceptually this movie lives in the same league as Children of Men and Blindness, that is some fantastic company. I must say that Ewan McGregor keeps growing on me. He is getting better and better with age, not that he was any slouch to begin with (his performance in Shallow Grave is one of my all time favorites). Eva Green is so hot too. I really have not seen her in much but she is always at least adequate. It’s obvious that screenwriter Kim Fupz Aakeson tried to make Perfect Sense occupy the same niche of metaphorical and cerebral science fiction as my previous stated films. Unfortunately it just does not work.

A chef and a scientist fall in love as an epidemic begins to rob people of their sensory perceptions. That’s it, there is a romance too but it is kind of underdeveloped so it really did not need to be there. Moments of Green and McGregor’s romance were really good and interesting but on a whole were kind of weak.
Ewan why do you show your penis in every movie you are in? We get it you like to be naked; I bet Star Wars was difficult for you. That is not my gripe with this film, the direction was severely lacking.

David Makenzie tried too hard to make this film visually interesting rather than letting the actors get deep into the characters. There are plenty of shots where I saw the director looked like he was just playing with a new toy (GoPro’s galore).

Also worth mentioning are the scenes when mass amounts of people lose a sense, they react in a feral like way which is highly effective in the message it’s trying to put across. But finally the movie leaves you with a profound feeling of “So what?”

The movie looks and sounds good (that’s kind of punny). Not the audio and visual quality that we are used to with releases from a major studio or Criterion, but it did not feel like a DVD. There are very little in terms of special features here just a weak featurette that feels like a trailer and a trailer.

Overall the acting and the premise really help an overwhelming weak script and direction. Am I glad I saw this film? Yes. Is it really that bad? No. I have mixed emotions about the film. There are some excellent parts there are some serious plot holes, it all kind of levels out to an average film.

can be purchased now on Amazon.com