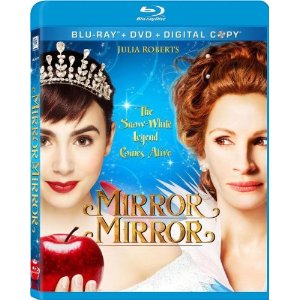 After all the awful things I heard about this film upon its theatrical release it was hard not to go into this film with a bad attitude. I really enjoy Tarsem Singh’s film work but was weary after watching Immortals earlier this year. The Fall is one of my all time favorites and I think The Cell was OK. So where does this film fall? Were the critics right? Or was this an issue of misguided expectations? I have to be honest and say that Tarsem’s Mirror Mirror was one of my most enjoyable watches of the year so far!

After a beloved King vanishes, his ruthless wife seizes control of the kingdom and keeps her beautiful 18-year-old stepdaughter, Snow White, hidden away in the palace. But when the princess attracts the attention of a charming and wealthy visiting prince, the jealous Queen banishes the girl to a nearby forest. Taken in by a band of rebellious but kindhearted dwarfs, Snow White blossoms into a brave young woman determined to save her country from the Queen. With the support of her new friends, she roars into action to reclaim her birthright and win back her Prince in this magical adventure comedy that will capture the hearts and imaginations of audiences the world over. – Via Relativity Media

What made this film so good? That’s tough because it can be criticized for the same reasons. It is a visual feast. The sets design and costuming are amazing! I can watch this flick over and over just amazed by the colors. It has a really Bollywood element to the design but still keeping the American blockbuster pace.

The casting was good Armie Hammer was good as prince charming, and newcomer Lily Collins was fantastic as Snow. Julia Roberts was good enough but it really just seemed like a paycheck to her. The Dwarfs were all enjoyable and fun. It was nice to see Nathan Lane again and wish he had more screen time.


So why is this film getting trashed left and right? The Script. Its really weak its all kind of tongue in cheek and fluff. The climax of the film is underwhelming. There is also Bollywood dance sequence during the credits (almost ruined the movie for me).

The Blu-Ray video and audio quality are both fantastic. But the supplemental are lacking a bit. There are some wisely deleted scenes, a making of feature, and a feature about Armie Hammer’s preparation for the film. I did not watch the making of the Bollywood dance sequences for fear of yelling.


Overall Mirror Mirror was a good solid flick. This film will find it’s audience on home video. It’s odd and magical, it’s surreal and fun. Mirror Mirror should not work but it kind of pulls the Galaxy Quest card with being campy and fun. Also, after seeing the other Snow White film this summer, this is the one to watch!

Mirror Mirror is available for purchase at DVD & Blu-Ray retailers

Overall:   4 Giant dwarves out of 5 Review by Bro’ B – BenWe received product for our review. All opinions are our own