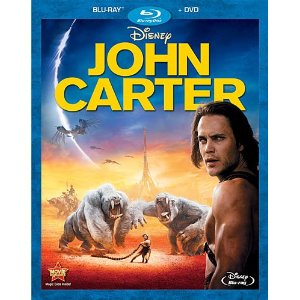 I love pulp cinema, my film education heavily relied on pulp detective stories and pulp horror. I never got into the whole pulp action thing; Conan just never did “it” for me. That’s not saying I don’t dig Conan, it rocks, but it was just never my thing. I really had no understanding of the story going into John Carter but I loved the crew behind it so I dived right in!


Did you see Avatar? Yeah…it was the same movie. John Carter, a Civil War veteran who in 1868 was trying to live a normal life, is “asked” by the Army to join. But he refuses so he is locked up. He escapes and is pursued. Eventually they run into some Indians and there’s a gunfight. Carter seeks refuge in a cave. While there he encounters someone who is holding some kind of medallion. When Carter touches it, he finds himself in a place where he can leap incredible heights, among other things. He later encounters beings he has never seen before. Later he meets a woman who helps him to discover that he is on Mars. And he learns there’s some kind of unrest going on.


At its best John Carter feels like a Frank Frazetta painting has roared to life killing everything in its path. The design, character movements, acting, action, camera all come together. However, at it’s worst it is a boring bloated mess of film that may have bored me to death if I had higher expectations.


Most of the films problems could have been worked out in the editing room and some recasting. The lead of the film was a bit too young sorry Taylor Kitsch, nor does he have the acting chops. However that did not stop him from looking completely badass from time to time.

Just like all Disney Blu-ray’s the film looks amazing. It really is a feast for the eyes. The special features are amazing too. Honestly, I love how Disney puts together a disk. A fantastic audio commentary, I love listening to Stanton talk. A series of deleted scenes in various states of finish. A short documentary about the author of the book, this could have been amazing but it’s too short. Then there is a nice making of feature and some bloopers that are really weak.

Overall John Carter is kind of eh, parts are fantastic parts fail miserably. At it’s best it’s a really fun pulp flick in the vein of Conan and Frazetta. At its worse it is a bloated mess that could have been seriously edited down. Honestly the movie is definitely worth the rental, the good don’t out weigh the bad and likewise. Rental!

Overall: 3 Mark Strong, ever the token villain out of 5