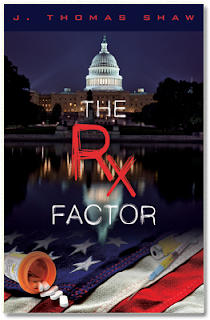 Author: J. Thomas Shaw
With a plot that is politically hot, The RX Factor pulls us in to the lair of corruption at the levels of the FDA, lobbyists, the top layers of our government, and drugs that work but are held back to keep the population down, etc. – and it works.  However good the plot, the characters lack that luster of three dimensionality that I demand in good characters.  This is a great summer read, but don’t put down A Drop of the Hard Stuff or Alpha to read it.
Big politics, big pharm, big dollars – and big cures at astronomical prices for only the rich and wealthy that can travel to alternative clinics in Mexico and off islands shadow Dr. Ryan Matthews.  Matthews, once a brilliant research scientist, owner of Immugene, an innovative company, and creator of a promising drug called Tricopatin, is now a drunk hanging out in Exhume, the Bahamas.  Along with his partner, Eric, Matthews developed a promising cure for ovarian cancer, Tricopatin.  Phase II failed in FDA trials, but in a horrible coincidence, Ryan’s wife, Cindy, was diagnosed with Phase IV ovarian cancer at the same time.  Ryan included Cindy in the trial, and when the drug failed, he stole enough from Fisher Singer Worldwide (the company that bought out Immugene) to finish the trial run on Cindy.  They had nothing to lose.  When Cindy and his children die in a plane crash as on their way to Exhume to relocate with Ryan, Ryan gives up.  His drug has failed and his family was dead.  The bottle was the only replacement he could discover.
Dr. Jordan Carver, a beautiful scientist herself, has flown into Exhume to meet her parents, the rich and influential Carvers, on their yacht.  She meets Ryan in a bar and they hit it off.  When Ryan offers to take her out to the yacht on his dingy, they sit paralyzed as they witness an explosion, and the yacht and everyone on it goes up in fire.  Carver is on route to Sayulita, Mexico to start up her own clinic, which offers the same illegal but potent drugs that Fisher Singer Worldwide offers at an affordable price – to anyone.  When the two are chased by three Haitians trying to run them off the road, Ryan’s FBI training kicks in and he maneuvers the killers’ car off a cliff.  What is going on with Jordan, and why are thugs trying to kill her?  Ryan decides to help her, fascinated by her passion and beauty.  And the games begin.
The plot sizzles, and as we collaborate with Shaw in the RX Factor, we wonder about the realities within the novel’s plot.  Great plot, timely and audacious.  I found the characters a tad over developed, and yet the novel worked well within its miasma of scientific and political espionage and seduction.  Fast, intrepid and thought provoking, The RX Factor will tickle your toes at the beach as you reach into the pocket of the huge drug companies, and ask the question – what really goes on?

is available at Amazon.com in hardcover or kindle format.

« Food Reviews: Saffron Roads Sauces
Movies: Save on these DVDs! »