You are here: Home / Fun / Books / Book Reviews: The Promise 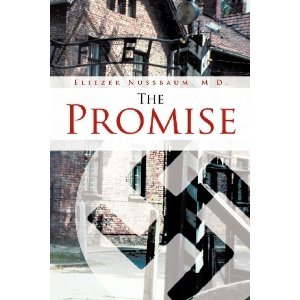 The Promise follows three main characters from Katowice, Poland, 1928 through the Holocaust years and their immigration to the US, Rome, and Israel. While well written, the theme is one that has appeared many times, with Sophie’s Choice, Shindler’s List and other fine novels with a firm hold on Holocaust fiction literature. With such a line up, Nussbaum creates a good novel with solid characters, and yet seems a little flat. The plot is convoluted and the characters are hard to track. The writing is quite good, and this is an interesting novel.

Kalman Gold and Yanusz Dov are best friends in the little Polish town of Katowice. Kalman is Jewish; Yanusz’s father is Jewish but has become Catholic to marry Yanusz’s Catholic mother. Yanusz holds both religions in his soul. But Yanusz’s mother, Theresa, hates Jews.

When Kalman saves Yanusz from death when Yanusz falls into a mountain crevice, Yanusz vows to protect his Jewish friend Kalman Gold and his family. Little does he know what this will entail, as the boys roam around Katowice. Kalman introduces Yanusz to a friend of his from college, Aaron Ross, a law student. Kalman finishes college and he and Aaron start a coal mining business at the same place that Kalman saved Yanusz from death. Yanusz travels to Rome to become a priest.

As the German war machine and the Nazis cross into Poland, businesses are taken, families are killed and Kalman and Aaron end up in Jewish concentration camps, but survive. Father Yanusz Dov, now Bishop Dov, has taken Kalman’s twin children Rachel and David to safety. He places Rachel into a convent and sends David to his Uncle Zido and Aunt Tania’s farm, where David will be safe during the war. A bomb hits the farm disintegrating it and killing Uncle Zido and Aunt Tania. David alone survives, just a teenager, and joins the Jewish military underground.

As Yanusz struggles with his faith as the Catholic Church ignores the extermination of the Jews in Poland and does nothing, Yanusz continues to keep his promise.


Betrayal, loss, courage, family and healing intertwine throughout The Promise. A good read for the summer, The Promise follows three generations of war survivors as it comes to its end. Again, the topic of the Holocaust creates a fusion for the characters, but also leaves a taste of the stereotypical within the course of the book. The violence is not so brutal and the characters suffer from too much angst or too little. I would have liked another 100 pages, on the order of The Thorn Birds. There simply was not enough space to chronicle three generations within the 1940 war years and 1960 timeframe. Good ending.


The Promise is available at bookstores nationwide.