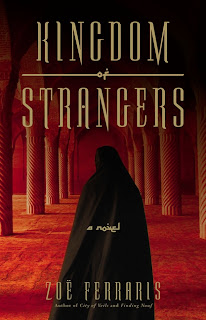 Kingdom of Strangers: A Novel

Author: Zoe Ferraris
Blasphemous and brutal, invaded by moments of compassion and courage, Kingdom of Strangers follows Ferraris’ City of Veils and leads us back to the cruelty and heat of Saudi Arabia.  Both women and men are dehumanized in the despairing reality if religious distortion, rigid gender roles, and atrocities and Kingdom’s characters and crimes reveal the biggest hate of all – crimes against themselves.
A Bedouin traveler discovers the corpse of a woman buried in an isolated sand dune.  Her face has been destroyed, her hands cut off.  Although the desert hides much, it cannot hide the 18 other female bodies soon discovered around the corpse.  Nineteen women – dead.  Colonel Inspector, Homicide, Ibrahim Zahrani and his junior officer, Waseem Daher watch the local police ruining the crime scene as they roam over the bodies.  Each woman has been shot in the head, rendering them faceless.  And the hands, all except three, are missing.  Zahrani and Daher are horrified.
An American profiler of serial killers, Dr. Charlie Becker, comes from the U.S. to assist the Jeddah detectives.  Because she is female, Ibrahim’s detectives ignore and ridicule her behind her back.  Charlie turns to Katya, a lab technician in the bowls of the building, to assist her.  And Katya cannot be happier.  She is not content with the morgue duties.  She wants Ibrahim to allow her to investigate, a job a woman is not allowed to do under the burqua.
Forensics discovers the women are non-Saudi; Filipinos, Sri Lankans, Indonesians – all in their twenties.  Katya Hijazi eavesdrops as the men discuss the case in Ibrahim’s office.  She discovers from the Medical Examiner that the womens’ hands have been cut off.  Chief Riyadh, Ibrahim’s boss, feels shame – Saudi Arabia claims no serial killers in its history, and yet the skeletons reveal a 10 year span of death.
Simultaneously, Zahrani’s home life implodes.  His son Zaki wants a divorce from the submissive wife of three months, Saffanah,  that he has been made to marry.  Ibrahim’s wife Jamila is a fat shrew who hates her husband.  And Zahrani’s Filipa mistress, the strange and beautiful Sabria, has gone missing.  Ibrahim cannot take Sabria for a second wife because she will not divorce her vile husband.  So Ibrahim is an adulterer, a crime in Shiria law.  Ibrahim despairs as he wonders if Sabria is the next victim.  And because he needs a woman to help him find Sabria, he leans on Katya more and more as he leads the investigation.  When Ibrahim discovers Saffanah is 3 months pregnant and Zaki cannot be the father, he takes Saffanah in more or less.
With a plot that screams to be read, Ferraris takes us into the patriarchal and fanatic Saudi Arabia where misogyny is condoned by both men and their women.  The main character, Ibrahim Zahrani, is an enlightened man, and believes women should be strong and independent.  A man of great complexities, he allows Katya to partner with him in finding the killer.  When Sabria is found murdered, Ibrahim goes to pieces.  Katya tries to protect him by sweeping the apartment before the police, but she cannot get in.  Ibrahim’s adultery is discovered.
A crime novel of intricate knots, a cultural palette of lost souls with characters both human and outliers within their own culture, Kingdom of Strangers rivets the reader to every page.
As Ferraris strips the burqa, we see through its black shroud.
Kingdom of Strangers: A Novel