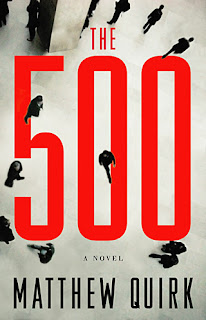 Matthew Quirk
Matthew Quirk’s debut novel combines Nicholas Sparks, Mark Billingham and John Grisham – and turns it into The 500.
Mike Ford, Harvard graduate and ex-conman and grafter has a father in jail for murder.  Mike desires the world of the rich and prestigious, for his dubious, trailer park past haunts him.  But not at the cost of his soul.
The 500 titillates with drama and action, with Serbs who torture, an elitist boss, Henry Davies, who slices and dices the top 500 politicos of Washington, DC, and slips in a love story between Mike and his coworker and supervisor, rich girl Annie.  One second, sweet and torchy, the next second Bourne like hit man, with a throw in of familial bonding and Quirk ricochets us around like the ball in a pinball machine.  A feel good crime novel deliciously original spits out a CLANG – winner!
Cha ching!  Mike Ford’s dad left him at 12 – to go to Federal prison.  Mike’s mom got cancer and Mike got all the ownership of responsibility and hospital debt.  Mike’s dad is a conman, sure, but somehow he’s gotten involved in a murder, but he’s never given up any names or fought for his innocence.  And Mike knows his dad doesn’t kill.  It just doesn’t run in the family genes.
Mike works – a lot – to keep the loan sharks at bay while he attends Harvard law school.  Suddenly, one of his professors, Henry Davies, wants him to join his company, the elitist Davies Group, which runs Washington, DC with its lineup of the best lawyers in the country.  The Davies Group cons lawyers, senators, the police, and anyone they have to, to keep Henry Davies filthy rich.  And Davies has the number on The 500; the Supreme Court justices, the President, the senators who run to him to create “favors” for their needs.  And Davies has the dirt on all of them.  But Mike doesn’t know how far the Davies Group will go.  He assumes they want him for his con skills, and why not?  Mike knows the game.  And from childhood, he knows how to play.  When Davies Group pays all of his loans, buys him a house, hand delivers Davies senior associate Annie on a platter, throwing in an outrageous salary, Mike shrugs.  He’ll do the do; after all, manipulation is his game too.  Then he learns from his boss and Davies’s intelligence officer, Marcus, how high the stakes really are.
When Mike discovers murderer is included in the billables, he sets out to take Davies down.  But Annie and his Dad might have to be sacrificed to do it.
In a turn around twist, Mike joins forces with some crazy sub assassins who are one of the Davies Group’s biggest clients and the novel explodes.
Fun, sweet, brilliantly plotted with rebounds and sink ins all about, what’s not to like about The 500?  One of those books that put calluses on your fingers from turning the pages so fast, Matthew Quirk’s The 500 is a breath of fresh air.  As Mike descends into Hell, Quirk keeps us enticed, and, well, happy, as good guy Mike and his Dad, along with Annie and a few friends, clear the decks and make Davies walk the plank.  I loved it!

is available for purchase at Amazon.com and other booksellers.