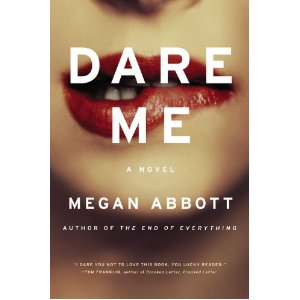 After The End of Everything, Abbott had to up her ante. And she did.

Dare Me, seemingly about teenage girls with no parental presence trying to control their only world, cheerleading, relies on taut psychological theory to sustain Abbott’s Lost Girls. Actually, everyone is lost in Dare Me, for there is no pivot of intimacy in any of the triangular relationships, just fear, emptiness, control, power and games. The metaphor begins with Abbott’s brilliant use of the biggest “game” of high school, the “cheerleader” or All American girl. And it continues to the end, in the circular drama of the triangle itself. Absolutely stunning writing, and powerfully poignant plot.

The main players are Addy Hanlon and Beth Cassidy. Beth is the head cheerleader, full of wild behavior and vicious attitude. Addy is her symbiotic lieutenant, following Beth’s every wish, including total isolation from anyone except Beth. The girls have been attached at the hip since childhood, competing with each other at cheer camp. Enter Collette French, the new cheerlead coach, cool, smooth and brutal. She kicks Beth off the team and places Addy in the position of her protégé. The other characters, Tacy, Emily, Sarge, and Will are all components of the triangle. As Collette turns her home into a party room for her “girls” she ignores her own 4 year old child completely. Her marriage to Will remains cold and Collette finds no drama in Will’s steadfast adoration of her. Enter Sarge, a war vet who is damaged beyond repair. When Collette and Sarge pull Addy into their sexual triangle, the stage is set for murder.

Abbott’s genius is in her use of the roles within the Karpman Drama Triangle, and Eric Berne’s paradigm of transactional analysis. Abbott’s theme is about life that has no core. The parents are all missing in Dare Me – they simply don’t care or exist. Addy picks Collette as the “good mother” only to discover that Collette is the child (“bad mother”), demanding that Addy mother her. Switch and bait. Sarge is Collette’s rescuer, only he is such a victim that he can only bring Collette down. These teenage girls have no interest in anything except their addiction to the power that Cheer gives them. Beth is rapaciously sexual with no emotion. Addy tries desperately to show a conscience; her words say one thing, however, her actions show her to be the most controlling character of all, as in the end she gains nothing except a new version of the “game” with victim Emily and betrayer Tacy as her new team of lieutenants. Beth actually shows some humanity as she almost gives up her life for Addy. The twist that Abbott’s brilliance creates is one of persecutor, rescuer, and victim and the game is bait me, switch, and yes, but.

For Abbott’s characters have only the three roles – all of them. Beth is the persecutor, Addy the rescuer, Collette and Sarge the victims. Then Will becomes the rescuer, then victim. Beth switches to rescuer at the end. Addy plays rescuer, victim and persecutor – i.e., the typical dysfunctional family and society that we pretend in today. Abbott depicts a world where nothing is genuine, all hidden within the “game” of “cheerleader.” Brazen and absolute in its precision and depth.

Like Faulkner’s Compson family, the roles twist and move, but do not change. No one in Dare Me reveal any real attachment or emotion. They simply survive, moving from one position to another. The game of addiction is Dare Me’s arena, and Abbott hits every note with perfect pitch. Caddy might have escaped, or not – Addy does not. She is the same crafty character in the end watching over her shoulder for Plan B in case Plan A does not work. In fact, Addy alludes to her desires (head cheerleader) but never allows it to be known except in the subconscious and then in her actions. Abbott is sensational in her depiction – with symmetry and hopelessness paired in a ballast of game roles.

Megan Abbott is one of the best writers out there today. She and Kate Atkinson create vignettes of women and men on the edge, girls lost with no center, a society engaged in furtive lies and betrayals as well as abandonments and reprisals. Both also offer hope within the miasma of their characters lives.

If you think this is a book about cheerleaders, you are wrong. It is a perspicacious and exacting study of people with NO lives, teenagers in desperation, girls without souls. Abbott asks the question – nurture or nature? As a society, we have created the abyss – now what are we going to do about it? Perfectly brilliant, fine tuned psychological suspense from a writer who might just surpass Faulker’s Sound and Fury. Let’s watch and see.

Dare Me: A Novel