You are here: Home / Fun / Books / Book Reviews: Between the Lines 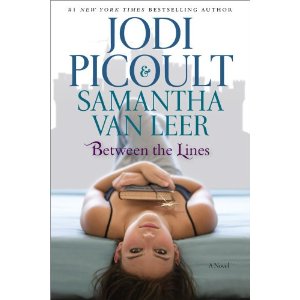 a book for young adults
Jodi Picoult and Samantha Van Leer
Jodi Picoult has an amazing habit of blowing away her readers with each novel she writes.  Her presence on the page is visceral and perfectly nuanced.  Now, in Between the Lines, she collaborates with her 16 year old daughter, Samantha.  And she blows us away – again.
Between the Lines, hiding behind a fairy tale genre, reveals a truth that we all forget.  We alone make up our destinies, even if we’re just a character in a book.
Ingenuous, delightful, totally original, Between the Lines presents teenage Delilah, an outsider who hides her teenage angst by reading books.  And she is obsessed with ONE book, called Between the Lines, about a handsome prince who finds courage in a land of once upon a times.  When Oliver, the prince, starts talking from the book directly to Delilah, she hears him.  He too is fatherless, and he wants to be someone else, just like Delilah.  He wants out of the story that imprisons him every time a reader opens the book.  He doesn’t want a plot.  He desperately wants to live his life.
As Delilah searches for her own reality through fantasy, Oliver joins her in creating the person he really wants to be.  Only how can Delilah get a written character out of his own story?  A story that lives in a book?
We all seek to be the princess or prince in our lives as teenagers.  Who are we?  What do we want?  As Delilah’s obsession with Prince Oliver keeps her coming back, the unattainable Prince singles her out.  Oliver, with a kind and queenly mother, Queen Maureen, a dead father the King who died at the villain Rapscullo’s hand while Oliver was trying to kill the Dragon Pyro who killed his father, lives another life once the book is closed.  And so do the other characters in pen and ink.  For Rapscullo loves butterflies, Queen Maureen is bored to death, Pyro is sweet and kindly, and then there’s Frump, Oliver’s dog in Between the Lines who has really been cursed from his human form into being a dog.  And then there’s Princess Seraphima the Perfect, Oliver’s maiden in distress.  Each time he kisses her, it’s an act – in the book.  But Seraphima is in love with Oliver and can’t understand why her beauty doesn’t affect him.  And Oliver hates that he has to play a role, day in and day out, instead of having a REAL life.
As the chapters rotate from Delilah to Oliver, Between the Lines becomes a metaphor in many ways.  Black and white thinking never works.  Life is not a role, but full of complex characters.  There is good and bad in all of us.  And happy endings require lots of work.
Delightful, piquant, robust like a fine wine, Picoult and Van Leer present the convoluted life of a teenager – turned inside out on a page!  Fabulous read, full of devious feminist mermaids, a pirate captain turned dentist, a dragon who wears braces, and a wizard who loves butterflies~!
Enter and enjoy!  Picoult and daughter Sammy are the mom and daughter writing team of the year.  AND it’s so refreshing to read a book imaginatively creative without a vampire and sordid violence.  Not only a book for young adults – I related to every single page~!  So buy it for your teenager, and don’t let him or her see you deftly put it into your briefcase or you’ll be really late for work~
Between the Lines