You are here: Home / Fun / Books / Book Reviews: A Darker Shade of Orange 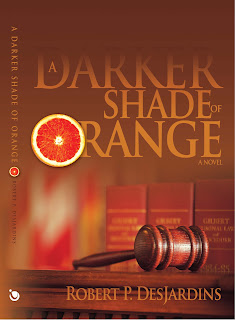 Author: Robert DesJardins
After reading The Land of the Saints, I wanted more of Robert DesJardins.  His prior novel, A Darker Shade of Orange, did not disappoint!
With intimate knowledge of the Orange County, CA judicial paradigm, DesJardins shoots from the hip in this drama that steeps itself in a plot that implodes – then explodes.  Framed within a taut political climate, A Darker Shade of Orange introduces maverick attorney Dennis McCauley, caught in a nightmare as he is arrested for the murder of Judge Cactus Jack Fletcher.
Dennis, involved in a simple contingency fee case for Francisco Corona, knows it’s a slam dunk case.  Corona, on a family vacation to Mountain Park, is on the Mountain River ride when the car behind him rear ends his car.  Corona, thrown from the ride, breaks both legs and ruptures his spleen.  Dennis wants justice for Corona in the form of dollars.  And then Dennis discovers that infamously incompetent Judge Jack Fletcher, known for dissing damages award cases, will be the judge hearing his case.  As Dennis sits in a bar moaning about his bad luck, he makes a serendipitous remark to his fellow lawyer buddies sitting on the stool next to him.  ‘Jesus Christ!  Where is Lee Harvey Oswald when you need him?’
Judge Fletcher’s bailiff sits two stools down.  And the next morning Judge John (Cactus Jack) Fetcher is found gunned down in his own driveway.  The sheriff on the case is one Bob Curtis, who has had prior run ins with Dennis McCauley.  It seems 10 years ago McCauley discovered one of his law firm partners embezzling his firm, and threw a punch at him.  And Curtis, who carries no fondness for McCauley, was the arresting officer.
A Darker Shade of Orange pounds the gavel in your face as DesJardins’ spits out an in-depth knowledge of judicial mayhem and corrupt politics.  Never pedantic, DesJardins wraps this novel around us like a cashmere shawl.
Enter Claire Dorne, Deputy DA, Orange County.  A former prosecutor, Dorne is assigned to the murder case.  She knows she can afford no mistakes.  Her boss, Rebecca Newman, rides Claire like a stallion.  And the evidence is all in front of Claire.  The shotgun that killed Fletcher belongs to McCauley.  When McCauley’s best friend, Nick D’Angelo, turns up bludgeoned to death with the same shotgun, Dennis looks fried.  But Claire is baffled.  How did Bob Curtis get Dennis’ shotgun?  And why would Dennis, a seasoned lawyer, lay out two murders so simply?  The case doesn’t add up and Claire suspects foul.  When Newman threatens her with her job to tie up the case and tie it up fast, Dorne quits.  She wants the truth.
Meantime, Dennis calls in his guns after being released from jail.  Bob Wall, an ex cop and Dennis’ friend, starts looking into the case.  And Claire, knowing something is all wrong, joins him.
As Dennis, his attorney Carl, Bob and Claire start digging, they discover old alliances and big politics in the name of a man called Silva.  This ferociously fast plot never puts on the brakes!
Fast paced, laced up to the gills with intrigue and greed, with a plot that twists and convolutes, A Darker Shade of Orange packs a wallop.  This thriller sets your teeth on edge – and then pulls them out.  Take your places, readers.  You’re teetering on the cliff – and DesJardins knocks you right off – with an inferno of a fall!  Great read.

is available for purchase on Amazon.com