Just like many people I started with a New Years resolution about being healthier.  Just like many people I failed miserably.  This mostly comes down to that fact that I love to eat (who doesn’t?).  The problem is that I love to eat everything.  By no means am I a foodie I’m more of a seafood guy (lol bad joke).  I do understand the new trend in healthy eating is gluten free.  Udi’s Classic Buns are my first introduction to eating gluten free! 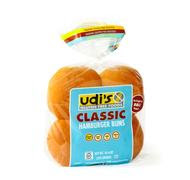 Well that’s almost true I have had Udi’s Snicker Doodle cookies that are absolutely amazing.  However I did not have the same relationship with the classic and wheat buns.  I tried these buns three ways two of which were excellent one was not.

Unfortunately, I introduced myself to the classic buns by just thawing one out and putting a vegan burger on it.  It was horrible.  The taste and consistency and heartiness really put me off.  Thankfully I decided to give it a second chance.
Second chance – I ran out of bread and was too lazy to go to the store (yep that happened).  So I nuked a bun until it was nice and soft.  I assembled my sandwich and went for it again.  Thankfully it was fantastic! The taste was not distracting at all!  Purely delightful! There was a third and final test… 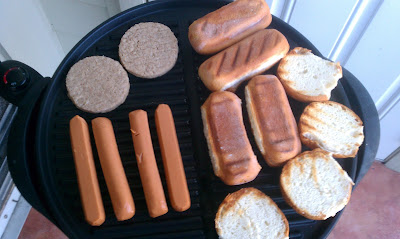 Final Test – The Grill – The other night I had some company over who was very health conscious (vegan).  So I decided to go with the Udi’s Buns on the grill!  They were a hit!  After having them on the grill for about 20 minutes they came out nice and toasty.  Where they good!  The only objection was the size of the bun, which was complained as being too large!  I just think there were too many fixings on it.
Over all yes the buns were fantastic but unfortunately have to be warmed up before eaten or they will be a bit lacking.


Want to have some fun and possibly win a $500 gift card?

Head over to Udi’s BUN-GO game on the Udi’s Gluten Free Foods Facebook Page. BUN-GO is their way of getting fans exciting for summer and giving you the items you need to host a great BBQ. Each participant will get their own BUNGO board, similar to a BINGO board. Each square has an associated task, such as answering a question about your favorite hot dog toppings. Once you complete a row, diagonal, or column of squares (i.e. tasks) you earn points toward Udi’s Gluten Free bun coupons and other barbecue essentials. If you complete your entire board, you’re entered to win a $500 gift card to one of the following retailers: Home Depot, Williams-Sonoma, or Whole Foods.


Ratings are based on a 5-star scale
Overall:  4
Review by Bro’ “B” – BenWe received product to facilitate this review. All opinions are our own.