You are here: Home / Fun / Books / Book Reviews: The Cottage at Glass Beach 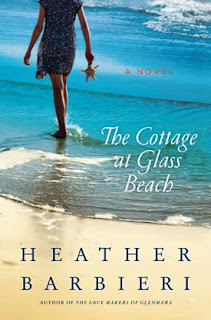 Heather Barbiera’s third novel, The Cottage at Glass Beach, follows a novel I adored, The Lace Makers of Glenmara. The Cottage follows the Irish theme, family betrayal, loss, mothers and daughters and the Irish mysticism of the sea. As the waves crash against each page, I thought of Alice Hoffman’s brilliance with myth woven into reality. Barbiera, however, while a talented writer, did not present the characters as strongly as I desired, and missed the subtlety that changes Hoffman’s myth into reality as the reader ponders and falls into the ripples of Hoffman’s themes. Still, Cottage is a good novel.

Nora, wife to J. Malcolm Cunningham, Massachusetts’s youngest attorney general in state history, has taken her 12 year old Ellie and 7 year old Annie and fled to Aunt Maire’s cottage in isolated Burke Island, New Hampshire. Her husband’s very public affair with a younger woman, and his refusal to give her up, have created a maelstrom of publicity and has rampaged into Nora’s life and sense of security. Charismatic Malcolm, embroiled in the affair, wants Nora to accept that he can love two women at the same time. Nora, bruised and humiliated, runs to New Hampshire when an aunt she barely knows sends a letter of invitation. Nora has no choice.

Nora’s own mother, Maeve, Maire’s sister, disappeared when Nora, at the age of 5, was found wandering the beaches of Burke Island, barely alive. Nora’s father, Patrick, never recovered the loss of his beloved and bewitched Maeve. Now Nora needs to regain control of her emotions, find out about her past, and sort out her chaotic feelings about her marriage.

On the island, Nora discovers a shipwrecked man on the rocks, Owen Kavanaugh, and pulls him to shore. Owen has lost his memory in the turmoil of the wreck and the bruising against the sharp rocks in the bay. Aunt Maeve insists that Owen take up residence in the fishing shack until he recovers, and Owen shows his gratitude by assisting Aunt Maeve around her old cottage, repairing both the cottage and his memory.

Ellie, 12, wants her father. Annie, 7, delights in the wildness and abandon of the isolated island, Aunt Maeve and an elusive new friend Ronan, 8, whose father is Owen.

Laced with hints of the Irish selkie and Irish myth, Burke Island, an isolated paradise with 2,000 residents, creates both harbor and hell for Nora as she sorts through her memories and finds her mother with Aunt Maeves help – and then Aunt Maeve dies.

A stronger theme might have pushed this novel into a more elusive read. As it stands, Barbiera leaves us wanting more. Perhaps, on purpose? Perhaps, not.

is currently available for purchase on Amazon.com, B&N and other bookstores both online at locally.