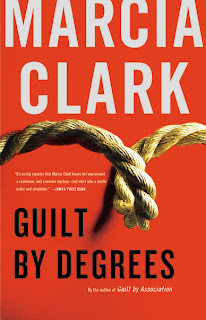 , Guilt by Degrees returns with Rachel Knight, Assistant DA, sharp witted, smart mouthed, and at her taut line best.  And glove or not, Marcia Clark proves once more that she is best known as a best selling author, rather than lawyer.  Like John Grisham before her, Clark has taken the law and implanted it into salacious characters like Rachel Knight.  Lemons into lemonade – tart and saucy.
Rachel, Toni and Bailey, the three Musketeers of Crime, return to their next case – psychopath married to psychopath = MURDER.
Rachel, Associate DA in the Special Trials Unit in LA, takes over a case from slime ball Brandon Averill, another prosecutor in the Unit.  A homeless man has been murdered.  As she mans the case over Averill, she creates internal waves in the Unit, but Rachel doesn’t care – every crime deserves justice, even a low profile case.  As she weaves around the web of the case, it trips into and connects with another murder of a cop the previous year.  The murdered homeless man turns out to be Simon Baylor.  His younger brother, an LA cop, Zack Bayler was murdered the year before and dismembered.  Zack’s wife, Lilah Bayler, was acquitted of the horrendous crime.  But in the bank video Rachel retrieves from the scene, Lilah Baylor is just a few yards from Simon Bayler when someone stabbed him – and the chase is on. Toni La Collette, also in Special Trials and Rachel’s BFF, join Bailey Keller, LA detective, in the irreverent threesome of Guilt by Degrees.
The plot moves through the tunnel of prose like a train going off the tracks.  Intricate, passionate plot along with sassy Rachel, sock it to me Toni and awesome Bailey set the scene for a good romp around Crimesville, LA style.  A good, solid Rachel Knight novel, although it didn’t blow my socks off like Guilt by Association.  But Guilt by Degrees still showcases the talent and chutzpah of Rachel and Marcia who created her!

Someone has been watching D.A. Rachel Knight–someone who’s Rachel’s equal in brains, but with more malicious intentions. It began when a near-impossible case fell into Rachel’s lap, the suspectless homicide of a homeless man. In the face of courthouse backbiting and a gauzy web of clues, Rachel is determined to deliver justice. She’s got back-up: tough-as-nails Detective Bailey Keller. As Rachel and Bailey stir things up, they’re shocked to uncover a connection with the vicious murder of an LAPD cop a year earlier. Something tells Rachel someone knows the truth, someone who’d kill to keep it secret.

is available for purchase beginning May 8, 2012