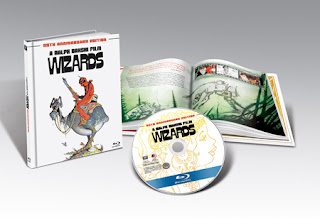 One thing I’ll say for Ralph Bakshi’s cult classic “Wizards”: It’s got brains. The whole political allegory coupled with a cautionary tale about fascism, propaganda and the amorality of technology really worked here. Rarely do you get this sort of thing in animated movies back in the 70s. The fact that it is coupled with an overall “fairy tale-ish” look that seems more at home among those cheap “ages 3 to 8” cartoons makes the viewing experience a very unique one.  It really is too bad that so much time and effort went into developing the whole underlying political themes that nothing much else went into the aspects of the film that would matter to most people, aka the dialog and the animation itself.
In a bleak future that’s a blend of World War II Europe and Tolkien’s Middle-earth, a runty wizard must save the world from fascist mutants controlled by his evil twin brother. Seems the bad bro likes to toy with enemy armies by projecting films of Adolf Hitler speeches during attacks.  I know the plot here is weak!
Here is the thing about Wizards it was made a few years after “Fritz the Cat” which is vastly superior both in animation and message. Bakshi creates a fantasy world that’s one part cautionary technological tale to two parts Tolkien rip-off, the stuff of junior high notebook scribbles and adolescent fan fiction.  There are good and bad points but for all intents and purposes here this is a nostalgia piece.
The video and audio restoration look and sound just about as good as they can.  But the real prize here is the case.  It’s really cool it has this little booklet with all kinds of concept art.  The audio commentary was very defensive and I really don’t know how to feel about his relationship with his own work.  There is also a making of feature that was ported over from the old DVD.
Wizards does not hold up as well as Fritz the Cat or Heavy Traffic (both animated classics for me but not for kids or families).  However there are still plenty of things to like about this Blu-Ray.  I watch it and can’t help but think that I will never again see a movie like this.  This film may be PG but it is definitely not for kids.
Wizards (35th Anniversary Edition)

Overall:  2.5 stogy smoking wizards out of 5 Review by Bro’ B – Ben
We received product for our review. All opinions are our own