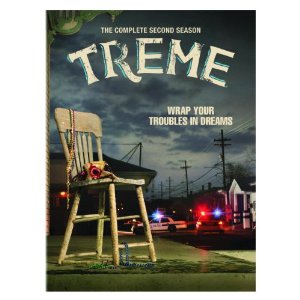 A show like this is always refreshing.  It’s just so deep and textural.  I feel like most shows are like McDonalds, high fat, a bit soggy, always the same exact thing, and when you are done, you want to vomit.  Thankfully Treme is not like McDonalds, it’s a gumbo (tons of different flavors).  It demands you spend hours, days even, exploring its Katrina-ravaged New Orleans, living with its characters, immersing yourself in its music and culture, marching its streets, sampling the local cuisine, breathing the air and singing the songs of a people whose mantra is “won’t bow, don’t know how.” It demands your attention. It demands your patience. It demands your investment. And that’s exactly what makes it one of the best shows on television.
Treme season 2 is like a visual novel, so going into the plot is impossible.  Fourteen months have passed since Hurricane Katrina, but residents of the Crescent City are finding it harder than ever to rebuild their lives, much less hold on to their unique cultural identity. Some have become expatriates in distant cities. The insurance checks that never arrived for homeowners were followed by the bureaucratic nightmare that was the Road Home program, and a land-grab is underway as developers and disaster capitalists press their advantage. Crime and drug use are up, and corruption and graft are endemic, with civic institutions unable to counter any of it. And yet the culture of New Orleans somehow endures.
The show really is not about New Orleans it is the city.  If you require loads of explosions, buckets of blood and a car chase ever five minutes this well written program is not for you. “Treme” is like a great American novel with its many characters and layers that gives the viewer a Dickensian look at one of America’s greatest cities, New Orleans. While there is plenty of drama (The Danziger Bridge killings, street crime and City Hall backroom deals) it is the music and the musicians that are consistently the focus in this outstanding series.
Oh, and the acting, the acting is amazing.  Musicians such as Steve Earle and Kermit Ruffins show from time to time to show off the musical chops as well as some fantastic acting.  The series actors are always impressive (we need some Emmys here) but Khandi Alexander as LaDonna Williams owns this season.
My only complaint are the special features I get very confused using the interactive features and tend to give up on them quickly.  There are features about the food of Treme (yum) about Mardi Gras Indians (sparkly), and a great q&a with the show’s creators.
This show needs to be seen!  It does take time and patience so if you get bored easily this show is not for you.  Your patience will be rewarded with great characters, an interesting story and a fantastic visual experience!
Treme: The Complete Second Season

is available for purchase NOW.

Overall: 5 Trombones out of 5