You are here: Home / Fun / DVD Reviews: The Killing 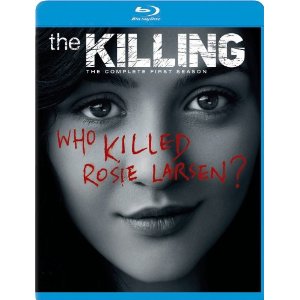 I’ve seen a lot of shows in the genre, including all the CSIs, NCISes, Criminal Minds (plus Suspect Behavior), and so on and so on. You get my point, I’ve seen a lot and it’s pretty hard for a new show to impress or surprise me. This one is different. Refreshingly different.  This show live in the same ballpark with The Wire, Homicide, Treme, and Twin Peaks.  While not as good as those shows (come on is anything) it is still one of the most interesting cop procedurals I have ever seen.
The whole first season is one murder case, so you can expect some slow pace, and slow pace doesn’t always mean a drag, and “The Killing” is the best example for that, the pace is deliberately set to slow, to let all emotions, settings to sink in, the show gives you very subtle clues and you would swear that know who killed “Rosie Larsen” and think it is your idea, which is most often first proved right then wrong 🙂 The acting, direction, screenplay, music an absolute top notch, a lessen that other crime thrillers should take a note of this epic of a thriller.
Why did I like it so much? Well, the pace to start with something. It is somewhat slower than you’d expect. It doesn’t drag, but it’s not racing ahead either. After the pilot ended I looked back and said to myself, “so that’s what I’m missing in CSI…” It gives you a chance to keep with the storyline, empathizing with the characters, to immerse yourself in this dark (and rainy) atmosphere. The slower than average pace makes it more enjoyable and conveys more emotion.
My only problems were that there seemed to be a red herring every episode.  I hate it when the script just dangles carrots in front of our faces each episode.  The final episode of the season is a bit of a cop out but I am still interested to see what happens this Sunday.
There are only two commentary tracks but fortunately they are pretty good.  There is an extended finale that did not really feel extended.  There is a making of feature and a sad excuse for some deleted scenes.
I liked the characters and the story and the pervasively dreary mood the show’s writers established, but I was less than enthused with some of the lame cliffhangers and other necessary evils of serialized weekly television.  I’d suggest picking up the 3-disc Blu-ray set, settling in for a weekend-long marathon–a disc a night? Getting all caught up for the premiere of season two. Recommended!

is available for purchase – time to catch up on this one.


Review by Bro’ B – Ben
We received product for our review. All opinions are our own