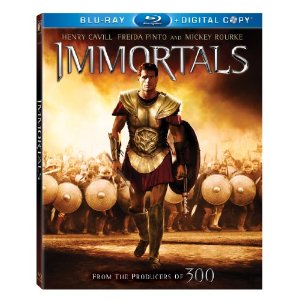 If you’re into Greek mythology don’t watch this flick.  It will piss you off.  Fortunately I am not into mythology but unfortunately I was still left a bit sour.  If you’re going to mess up Greek mythology, I guess you might as well make it pretty. Immortals was directed by Tarsem Singh who also directed The Cell and The Fall, both of which are decent movies that are a bit of style of substance, which also happens here. I think Tarsem is just known for making a beautiful movie with a weak story, he’s more of a visual director rather than a storyteller.
Pointless Plotting
King Hyperion has declared war on humanity. He searches for the Epirus Bow, a legendary weapon created by the war god Ares, which will allow him to free the rest of the Titans from Tartarus and take revenge on the Olympians who brought about their downfall. In accordance with ancient laws, the gods are unable to take a side in the war between Hyperion and humanity. It is left to Theseus, who was chosen by Zeus and accompanied by the priestess Phaedra and a thief named Stavros, to protect his homeland and save the gods.  I don’t get it either.  But there were plenty of boobs and blood to get me through. 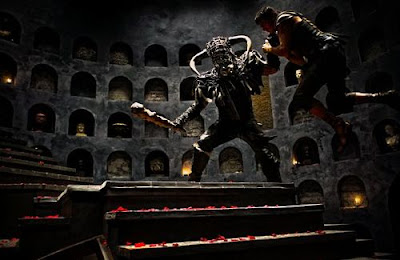 However this movie was not a complete loss!!! There were exploding heads!!! Hell yes!!!  But that’s really it for the positives.  The acting is insultingly awful. Cavill seems to think that just standing there and looking handsome and what not is acting. And while he is indeed a handsome fellow, he fits the role of Theseus in looks only. He barely emotes throughout the film, and even the one scene (where he watches his mother get killed) isn’t enough to redeem his boring performance. Freida Pinto does an all right job though her performance was nothing like we saw in Slumdog Millionaire or Rise of the Planet of the Apes. And I have a gigantic man crush on Mickey Rourke, but he was just hilariously bad. He rehashed his performance from Iron Man 2, and the result was awful.
There are plenty of special features for fans of the film.  However I would like to take this time to say that if a film has an alternate opening or ending, it usually a bad sign.  It basically says that the studio though the end sucked and here is the crap ending.  Here we have two alternate endings and an alternate opening.  Jeeeezzzz.  Other than that there is a nice making of feature, a bit about Greek myth and some deleted scenes.
Overall, this movie has some good visuals, but is flawed in script, logic, characters, dress, locations, bad use of source material and if it didn’t have a lot of extremely bloody violence and naked people there would be no reason to go see this movie at all. A number of other movies have done parts of the visual style of Immortals, but they have done it better, so go see those and not this.

Review by Bro’ B – Ben
We received product for our review. All opinions are our own