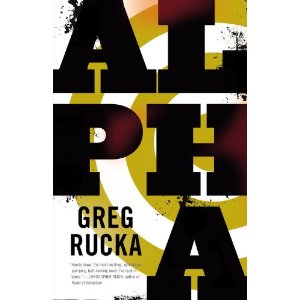 Author: Greg Rucka
Superb, crash car crunching, cop chase thrilling, stunningly original.  Toss in rip tear honest characters, staccato prose, genius timing.  ALPHA = audacious, sizzling, sinister and mesmerizing.  I could continue with a long string of superlative adjectives, but you know what?  I still could not describe the sheer velocity of this tornado of a novel.  Greg Rucka = good, better, best.
The genius of Alpha arrives in the form of Rucka’s ability to create visual motion with sentence fragments that drive the novel right through the roof at a cyclonic speed.  The prose and characters snap, crackle and pop.  This novel creates a wind tunnel that sucks its characters and readers inside and spits them out – into the reader’s chest with a punch!  Phenomenal, Mr. Rucka – the best of the year.
Jad Bell, undercover Delta Force operator, and his team – Chaindragger, and Bone (all ex Delta Force comrades in arms) – have been placed by their boss, Colonel Ruiz inside Wilsonville.  Wilsonville, a direct competitor of Disney World, is one of the top amusement parks in the country.  A rumor has circulated that something bad – like in nuclear bad – might be operational in certain theme parks.  Ruiz is on it, with his bad good buys at the helm.  But the park brass are idiots, and refuse to believe that anything could go wrong within their control freak run park.  As the park higher ups create a push and pull, Jad, Chaindragger and Bone have to run the risk of running them over to figure out the plan, with the clock ticking and the park filled with unsuspecting participants – lots of them.
Terrorists?  Nuclear bomb?  Ruiz isn’t sure, but the rumble of trouble shakes like the high roller coaster rides.  And Bell?  Well Bell can handle whatever is thrown at him (except perhaps his family).  With up to 100,000 visitors a day, Wilsonville is prime target.
When Bell discovers that his ex wife and deaf daughter are coming to the park the following weekend with a bunch of other deaf kids on a school event, he panics.  Intuitively, he knows something’s coming down and he suspects the insurgents to strike.  And still he stays in charge – of the operation.  He can’t talk his ex wife out of coming, and he’s too busy trying to save the country from maelstrom to work it out.
This is NOT a plot that can be revealed.  Just let me say that Jad Bell is more than three dimensional.  He floats above Jason Bourne and even Eddie Pisorchek as he tries to do his job, while possibly losing his family.  The choices are harsh, and the emotions are high.
With a writing style that cranks like E. Annie Proulx mixed with Robotham, ALPHA creates a high risk novel that sears at the reader like a laser.  Unbelievably tense, tight and memorable, this is an adrenaline novel.  Read it – or die.  Rucka, you rock.
Alpha

is now available in bookstores as well as online at Amazon.com.