You are here: Home / Fun / DVD Reviews: The Three Musketeers 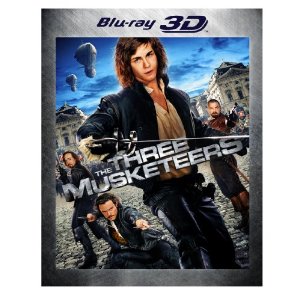 First of all I ought to note that I did not expect much of this film – and yet was left completely underwhelmed. ??

There are some major issues regarding this film which I would like to address, they are the reason for my extraordinarily low ranking, which would have been even lower if I had not thought it disrespectful to those actors who did their job very well (against all odds).??

One may argue that screen adaptations require some changes to be made to the original material, and I wholeheartedly agree, but the changes made to this particular adaption are so fundamental they might as well not have bothered to call it „The Three Musketeers”. There is as good as nothing left of the original plot in this movie, and what is left of it is changed beyond recognition. I did expect it to be more action laden than ultimately necessary, I expected it to deviate from the original plot, but nothing could possibly have prepared me for this shipwreck of a film. ??

One might think that while a film shouldn’t be required to follow the book’s plot word by word to qualify for bearing the title of a famous novel – one should be able to tell it is supposed to be based on said novel, right? Apparently not. Apart from the title and he names of the characters, there is but little that would betray it to be even roughly based on Dumas’ novel. Buckingham is turned from lover to evil Lord, and Queen Anne into a blameless little lamb who fell prey to the Cardinal’s machinations. No such thing as the fleur-de-lis is even mentioned. Constance doesn’t only not die, she isn’t even threatened by Milady. And that’s just a selection. ??


One might be led to think it was deliberately conceived as a parody of remakes. After all, it has all the ingredients – a butchered plot, characters with any depth taken out of them (despite the fact that if given the chance, most actors would have delivered an outstanding performance, but the time usually assigned to character development is devoured by “sexy” scenes featuring Milla Jovovich – who herself is a whole other problem), references to everything from the Matrix to Mission Impossible, goodness – it even has airships. ??
Fortunately the film looks and sounds fantastic and the technical merits are something to write home about. The special features are good here too. The commentary in very tech oriented and actually very interesting. There is an awesome picture in picture mode. There are also a few short EPKs that a quick and easy to digest about the adaptation, location, airships and Orlando Bloom.


Overall this was a complete waste of time for anyone. If you are looking out for a fun action romp go else where such as Mission Impossible. The Three Musketeers might look great and sound wonderful, but it’s otherwise a dreadful movie. Rather than a legitimate take on the old tale, this is a dumbed-down flick that fails to entertain, preferring fantasy and make-believe and eschewing even a semblance of a plot that audiences could take seriously.

is available at a store near you.

Overall:1 candy bar out of 5