You are here: Home / Fun / DVD Reviews: The Big Year 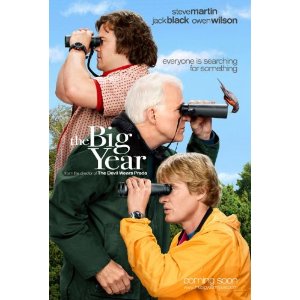 This film could have gone many different directions.  The Big Year could have been a Christopher Guest style mockumentary, or a beautiful depiction of mans connection with nature, or a interesting character piece about birders.  Unfortunately the Big Year is none of these things.  The Big Year is a middle of the road comedic piece that grabs at all of these things but never holds on too long.  The Big Year is loosely based on a nonfiction book of the same name–“This is a true story. Only the facts have been changed,” reads the opening text–and the title is a reference to an informal competition among North American birders to see who can spot the most species in a single calendar year.
Brad Harris (Jack Black) wants to become the greatest birder by winning the Big Year, a birdwatching contest. Kenny Bostick (Owen Wilson) is the current Big Year record holder, and other challengers abound, including Stu Preissler (Steve Martin), a retiring executive. The contestants travel around the world, trying to see (or hear) the most birds.
It is interesting to see Black in a pretty clean nice guy role that’s not vulgar or buffoonish. He’s kind of the central character of the film and it’s biggest protagonist. Martin kind of plays the same type of role he usually does, in these family friendly PG rated comedies, while Wilson plays slightly against type by being the film’s main antagonist (he still comes off as the same type of wild card he usually does just a little more self centered and rascally than normal). The movie has some touching human drama and strong character development as well. It’s not quite as funny as you might hope, with the three lead actors attached, but it is humorous still. The movie is pretty aptly made for it’s type and there’s really not anything to complain about. I wouldn’t say it’s a must see comedy but it’s not disappointing really in anyway either.
It is a really solid family feature that is ok for all ages.  It may be boring to some but that may happen with all movies to the right viewer.  This is a movie that will only let you down if you have high expectations for an over the top laugh riot.  The story could’ve had bite if the characters were more brutal to each other, but their hijinks and pranks are seriously tame. Oh no! Bostick tricked us into not taking the Anacortes ferry! I guess we’ll just have to sit out in this field and look for different birds instead.
The Special features are really lacking here there is only a making of feature that is not worth watching.  While, the characters themselves all seem to develop at a pace, it is the script, despite being neat, concise and thorough it lacks anything of vigor.  The Big Year is an example of how filmmaking, no matter how competent, can still refrain from fully engaging with an audience by simply refusing to take any chances whatsoever, especially when it is attempting to bring a mass audience into such an original and individual recreational activity.
The Big Year [Blu-ray]

hit the shelves at your favorite store and is ready to be watched.