You are here: Home / Fun / DVD Reviews: Myth of the American Sleepover 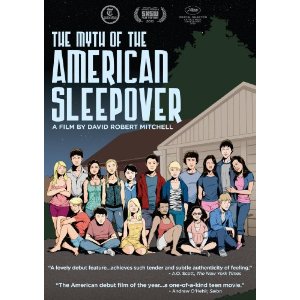 Four young people navigate the suburban wonderland of metro-Detroit looking for love and adventure on the last weekend of summer. Shortest one ever because the plot is so cut and paste.

The Myth of the American Sleepover plays like a toned-down, more modest version of Superbad. The parties are lighter, but are they more realistic? The language is softer, but is that reality? And the script is more controlled, but is it more fun to listen to? The main problem with the film is in the screenplay, which is slow, overly patient, and sometimes wholly vacant. There’s something going on in films today that is beginning to aggravate me.

My biggest issue with it is that the script rings totally false. These are young people anywhere from high school sophomores (thus, about 15) to about-to-be second-year college students (thus about 19) — and they all behave like 11-year-olds. Are we really to believe that people this age get all put-offish over mere kissing?! What world does the writer/director inhabit? Here, the editing is too loose, the acting is average at best across the board, and by the 20th time some guy announces “I want to kiss you” or the like, you’re just so bored with it all.

Alas, what kills the film is just its inability to establish worthy or witty dialog. It’s dark, yes, but even the darkest of comedies have their moments of wit and passion. The Myth of the American Sleepover doesn’t, and that’s disappointing. The film’s message basically tells us the teen life isn’t like Superbad or an Apatow comedy, which we’re fully aware of. But it isn’t as murky or as mundane as this presents it. It seems one of the few films to effectively blend realism with humor and believable characterization was The Breakfast Club. That had a lot of silence in the beginning, but it was fitting because these characters were just as foreign to each other as we were to them. By the end, they had talked up a storm with each other. While Myth is somewhat humanistic and poignant, it’s also slow and for the wrong reason.

Overall I was not what I am used to and honestly its kind of a snoozer. Parts of this film were good. However, the rest was so boring. I like a movie to be further moved from reality. I don’t want to watch my boring as hell high school years on screen.

has already hit the shelves.