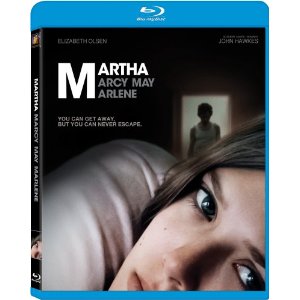 On the surface, this sounds like just another movie peeking inside a creepy cult that brainwashes, and psychologically and physically abuses women, and is led by a charismatic (and creepy) religious style figure-head. On first glance it feels like a Lifetime film. However the director takes the film in a much different and very creative direction by concentrating on what happens to Martha (Olsen) after she escapes the cult. Since the subject matter is so fertile for drama, I have no idea why there aren’t more narrative, non-documentary films about cults.

Martha has run away from an abusive hippie-like cult where she was living as Marcy May for two years. She turns to her sister and brother-in-law who take her in and want to help her. The problem is Martha is having a hard time separating dreams from reality and when haunting memories of her past keep resurfacing, she could need more help than anyone is able to give her.

The less you know about Martha Marcy May Marlene going in the better. One of the film’s charms is how it transitions between the past and the present. It illustrates to perfection the thought process and current mindset of the Martha character. Marcy’s Song, which is performed by John Hawkes, is a beautiful song but its context is genuinely creepy. Most of the conversations between Martha and her sister Lucy are some of the best scenes in the film. Their conversation by the lake while Ted is making dinner is one that stands out. You find yourself just enthralled with the film and just entranced with everything going on, but the ending is kind of a letdown. It’s very open-ended and was obviously done to keep you talking (which it has done very successfully), but it didn’t feel completely satisfying to me. It doesn’t necessarily hurt the film overall, but is just a small nitpick on my end.

The movie looks and sounds great. The special features are good here too. There is a short film that almost serves as a prequel/lead in to the feature. There are a few short EPKs too, a short interview with Elizabeth Olsen, a little about the background of the story, a making of feature, interviews with the filmmakers, and a short thing about the psychology of cults. Then John Hawkes performs a song from the film that is haunting and amazing.

Martha Marcy May Marlene may not be a perfect film and many will be frustrated by its lack of conclusions of any sort but it is certainly unique and it’s dozy, dreamy air makes for haunting cinema. Some of the clichés used are a bit worn but it still is a very good movie.

is available for your enjoyment.

« Book Reviews: Land of the Saints
DVD Reviews: Myth of the American Sleepover »