You are here: Home / Fun / DVD Reviews: In Time 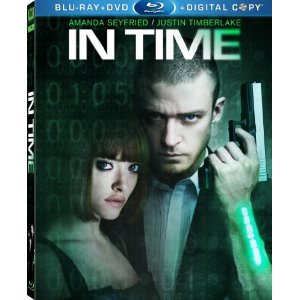 “Time is money” I tell my boss every time I invoice my hours he then just shrugs and writes me a check as we jokingly haggle over my pay.  But seriously that is the premise of this movie.  It’s kind of a super stylish futuristic Robin Hood.  On paper that sounds like a completely awesome flick and it could have been.  Unfortunately it falls in the ditch of being another style over substance sci-fi “action-thriller.”
The Synopsis According to Fox

Welcome to a world where time has become the ultimate currency. You stop aging at 25, but there’s a catch: you’re genetically-engineered to live only one more year, unless you can buy your way out of it. The rich “earn” decades at a time (remaining at age 25), becoming essentially immortal, while the rest beg, borrow or steal enough hours to make it through the day. When a man from the wrong side of the tracks is falsely accused of murder, he is forced to go on the run with a beautiful hostage. Living minute to minute, the duo’s love becomes a powerful tool in their war against the system.

Yes the movie kinda’ sucks, but Niccols does succeed in pushing the metaphor as a commodity. Those with time are rich, those without time are poor. It’s a simplistic analogy. As with Niccol’s other films, the cinematography is beautiful. The best actors in the film aren’t the main characters, rather Cillian Murphy, Vincent Kartheiser and (surprisingly) Alex Pettyfer present more interesting characters. They all shine, especially Murphy.
The film seems like one long car chase, when what you actually want to delve into are the complexities – the debates between the characters themselves over the issues of the world they live in. Not a single clever conversation happens between anyone.  Conversations are like if they were written by 5 year old, and I’m not kidding. I can’t even remember one, but it’s something like this: stupid question, stupid obvious answer, rinse & repeat.
This film solidified Amanda Seyfreid as one of the worst actress of all time.  Timberlake is also meh.  On the other hand, Amanda Seyfried wins two prizes, one for the Bulgiest Bra Scene (sadly, the time police raid interrupted a promising game of strip poker), and the other for the Longest Sprint In Inappropriate Clothing Scene (about 1,000 meters, flat out, in a miniskirt barely bigger than a wide belt, and high heels which were almost as tall as she was).
The movie looks and sounds great and I was excited to find a lack of special features.  There were a few deleted scenes that were excellent explaining JT’s fathers’ backstory.  Also there was a stupid lead into the film by way of foux documentary.  Mostly painless here.
Over all I may have been a bit too harsh on this film but I did enjoy the directors first feature Gattica so I had high expectations going in to this one.  However the film looks amazing on Blu-Ray and the supporting cast keeps the film from being unwatchable.  This film could have been so much more!

is now available for home viewing.
Ratings are based on a 5-star scale