You are here: Home / Fun / DVD Reviews: Game of Thrones 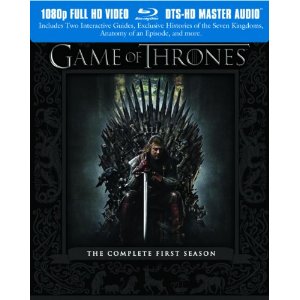 When I completed the first episode of this show I felt overwhelmed!  There was so much to take in and understand.  The language, names and places were impossible to keep strait.  Fortunately this show deserves more than one episode.  This show deserves as many episodes as it damn well pleases. It is complex, multi-layered, surreal, vibrant, imaginative and it draws your eye in to the surprising level of detail, from the sweeping vistas, to the narrow dungeons, from the beautiful castles and magnificent trees, to the contrasting landscapes. It is worth watching just for the scenery alone.

Seven noble families fight for control of the mythical land of Westeros. Political and sexual intrigue is pervasive. The dominant families are the Houses Stark, Lannister, and Baratheon. Robert Baratheon, King of Westeros, asks his old friend Eddard, Lord Stark, to serve as Hand of the King, or highest official. Secretly warned that the previous Hand was assassinated, Eddard accepts in order to investigate further. Meanwhile the Queen’s family, the Lannisters, may be hatching a plot to take power. Across the sea, the last members of the previous and deposed ruling family, the Targaryens, are also scheming to regain the throne. The friction between these clans, and with the remaining great Houses Greyjoy, Tully, Arryn, and Tyrell, leads to full-scale war. All while a very ancient evil awakens in the farthest north. Amidst the war and political confusion, a neglected military order of misfits, the Night’s Watch, is all that stands between the realms of men and icy horrors beyond.

Every episode feels like the season finale; the game transforms sharply, and the story-shattering shocks come that surprisingly. Betrayals lurk within every hall, fortress and shadow, and they don’t always come from the party or parties that are most likely to deliver them. 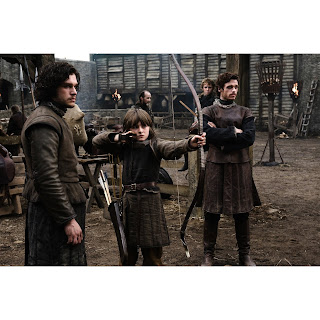 Thrones is as much a political thriller as a action genre piece. It is an extraordinary production teeming with gorgeous cinematography, stirring music, fantastic costuming, and arresting sets, locations and visual effects.  This show just looks amazing and it them most engaging show on TV.  This also stands for the Blu-Ray.

The Blu-Ray is firing on all cylinders here! It looks and sounds amazing and the special features are a plenty.  There are 7 commentaries that are all worth listening to.  Pop up tracks with fun facts about each episode that will link you to the massive complete guide to Westeros that I found to be over whelming. There are 15 character profiles where the actors talked about their characters.  A really exciting picture in picture mode with episode 6 (another must watch).  There is a very nice making of feature.  There are also a few short EPKs about the writer of the novels, the nights watch, the Dothraki language, and the opening credits.  All of these are much too short to get into any detail

Over all this is the best show on television.  This may have given The Wire a run for its money as best show ever!!!!  Run out and buy this show today!!! I have watched the entire series 3 times now and it still feels fresh.You can purchase Game of Thrones: The Complete First Season [Blu-ray]

via Amazon.com or your local retailer.