You are here: Home / Fun / Books / Book Reviews: The Second Time We Met 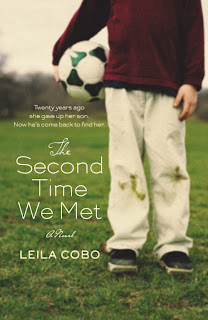 Leila Cobo’s first novel (See Review Broads review), Tell Me Something True, established her talent for plumbing the role and place of family infused into her oh so real Colombian characters. It swept me off of my feet. And now she’s gone and done it again!

The Second Time We Met introduces us to Rita Ortiz, 1989, living in a small cut off town, Cali, near Bogota. She is 16, innocent and beautiful. Rita’s cold family treats her with strict animosity, while they shower affection on her beloved younger brother, Sebastien.

When guerrillas enter her tiny, isolated village and take over, Rita falls in love with Lucas, the guerrilla leader called El Gato, the Cat. If her family discovers her secret, they will kill her and the townspeople will kill her family, for no one enters into an assignation with the terrorists that ravage the town. But at sixteen, she loves Lucas completely. When Lucas’s superior finds out about the affair, Lucas is given a choice. He must leave Eden and either take Rita with him to the guerrilla camp, where she might be raped by his companions, or leave her forever. Rita makes the choice. She must stay.

After Lucas disappears she finds herself pregnant with his child. Her family sends her away to an orphanage with the nuns, to have her baby. Rita names the baby Sebastien, and gives him up.

In another world, it is 2009. Asher Sebastien Stone, the beloved and privileged adopted child of Joe and Linda Stone, proves an upcoming soccer player with huge potential. His young life stops when he has a car accident and breaks his neck. Although he will recover physically, he will never play soccer again. Twenty year old Asher has an intellectual girlfriend, Alessandra. They decide to travel to Bogota and search for his birth mother, Rita Ortiz, for Asher’s brush with death engages a fire into his soul that he did not know he had. Linda and Joe come face to face with their biggest challenge, for as they support Asher and pay for the trip, they feel betrayed and frightened for themselves and their son.

Asher and Alessandra fly to Colombia to search for a woman who has remained well hidden since 16, as Rita has remade herself into another person with another name and a good life. She does not allow herself to remember Rita Ortiz, nor has she told her husband of her past.

Cobo takes seemingly stereotypical plots – and transcends them. Like Anita Shreve in her emotional nuances, Cobo’s true themes do not reside in her plots. Instead they render locale – the poverty of Colombia pivoting against the American lust for fame and fortune, and wealth. She engages the impact that circumstance imparts on her characters from her beloved Colombia. In this novel she has reversed the Colombian family closeness that does not appear in Rita’s life against the adoration of Sebastien by his adopted family, the Stones. And her characters provide their own push against illusion and stereotype.

Always real, always true, Cobo’s endings are her best surprise. Another daunting novel from a new author with vision and talent.

is on the shelves of your favorite bookstore, as well as kindle and other apps.