You are here: Home / Fun / Books / Book Reviews: Land of the Saints 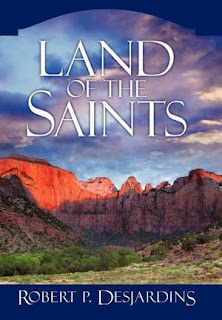 Explosive with a tang of Tony Hillerman and a slight suggestion of Nevada Barr, yet completely unique, Desjardins trumps every card in the deck with Land of the Saints. Enigmatic characters, a locale that specializes in enticement, and prose that rips through the plot, Land of the Saints swells with intrigue.

Jeff Wells, wealthy and successful man about town, partner and founder of a high profile law firm, and stylishly charming has an epiphany. He’s bored to death with his life and realizes that at 55, he wants out – he wants to be all that he can be – and he desperately needs a new life.

As Jeff calls his partner Tom Byrnes to quit, he simultaneously receives another call from Karen Higgins. Karen and Jim Higgins own a hands on dude ranch in Springerville, Arizona, the Wolf Creek Ranch. Karen and Jim run the ranch with their two sons, Frank and Sam. Wells has known them from years back, as he is an avid horseman and for five years went on the Ranch Roundups. Jim Higgins has been charged with the murder of 3 supposed horse rustlers – and Karen needs Jeff Wells to come out and help. Jeff’s on the road before he can make his second call to his partner at his law firm. And, on the road, he calls his brilliant and devoted secretary Doris and tells her he needs her help and to watch his back while he’s gone. Jeff’s Labrador retriever Dan goes with Jeff as they drive to Arizona.

The Higgins family’s Mormon ancestors come from Joshua Lee. Joshua Lee and Joseph Smith were con men together out East, and Lee stayed with Smith throughout the horror of the beginnings of the Mormon Church. Joshua Lee left an ancestral tome depicting the entire scheme of Joseph Smith and then Brigham Young as Smith went from a con man to believing in his own divinity. The Lee book reveals how the Golden Plates of the angel Moroni (supposedly given to Joseph Smith in a visit from the angel) were actually copper plates stolen by Smith from the Mirimac Indians. Joshua Lee has included a map of where the plates are hidden in the book he left behind. They are hidden in the sacred place of the Great Kiva, just outside of Springerville and the Higgins spread. Dr. Don Orr, an old friend and neighbor of Jim Higgins, and Jim have tried to find the exact hiding place, but are still looking. Until Jim is accused of murder. AND the Mormon militarist group, formed in Joshua Lee’s time, is on the hunt for the Plates too. As murder after murder piles up upon Jeff Well’s arrival at Springerville, Jeff and Karen begin to know that Jim has been set up for murder to keep him from the Plates.

As Jeff takes Jim’s place on this year’s roundup and Jim suffers in a filthy dungeon of a jail, several of the old time participants in the roundup gather to help Jeff and save Jim. But included in the bunch are three dude rancher wantabees, who have signed up for the ride rounding up the herd of 150 horses around the Lake.

Part history, all fiction, some mysticism, and 100% tantalizing mystery, Land of the Saints proves intricate and illuminating, much like The Da Vinci Code. But Desjardins Land of Saints remains totally original, daring and a great crime novel as Jeff Wells realizes his potential. Throw in a love interest, a plot that winds around the rivers and lakes of Arizona and The Great Kiva, and a superb ending and there you have it – absolutely riveting reading!

Overall:  5 thumbs up Review by Broad “A” – Ava We received a copy of this title for our book review. All opinions are our own.