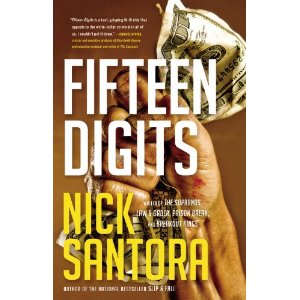 Author: Nick Santora
John Grisham, step aside (I LOVE you, Mr. Grisham; this is just a “parallel side step”).  Playwright/producer Nick Santora (The Sopranos, Law & Order, Prison Break, and Breakout Kings) seems COMPELLED to follow his debut novel, Slip and Fall, with a torched maelstrom of crime, a humdinger – Fifteen Digits.  Like The Firm, it’s nonstoppable!
5 Guys Burgers and Fries not so much!  These five guys, Fifteen Digits main characters, each work within the arena of Olmstead & Taft, a conservative, powerful and prestigious law firm in New York City.  Four work in the bowels of the building, the invisible basement – the Document Production and Disbursement Department of Olmstead & Taft.  Known as the Printers, these four guys format, edit, print, bind, deliver and store all the legal documents needed by the hundreds of lawyers upstairs.  All four are good guys.  Until one of the lawyers, sleazy Jason Spade, whose father is Miles Spade, a prominent partner of the firm, sets out to seek revenge on his cold and unloving father by befriending one of the four Printers.  And proposing a scam.
Rich Mauro has just gotten a job with the Printers.  Raised by his Uncle Jim, Rich is a carpenter by trade.  He’s going to college at night and hopes to become a lawyer.  Rich has known one of the partners of Olmstead & Taft, Maxwell Seymour, for years.  In fact, Rich considers Seymour as a father, and Max feels the same toward Rich.  And Rich is in love with beautiful Elyse, who comes from a prominent family and is used to a substantial lifestyle.  Elyse doesn’t care what Rich does, but she wants to marry him.  Rich has nothing to offer Elyse at the moment, and is terrified of losing her to someone her parents have hand picked for her, a rich guy named Terry.
Dylan Rodriguez is silent, hard working and smart.  Dylan lives for his pregnant girlfriend.  He brings each ultrasound into work to show the other guys.  And Dylan is a street guy, with a dark side to him.
Vicellous “Vice” Green has parents who are both violent and mean.   Vice wants to make enough money to take his eight sisters and brothers away from the abuse and take care of them.  If only he had the money.
And then there’s Eddie Pisorchek.  Even though he is handicapped and a tad slow, Eddie is the idiot savant supervisor of the Printers.  Meticulous, a genius with the machines, Eddie can make the machines dance – not an easy task.  Each of the hundreds of complicated machines must be hand coded for each complicated job, and the pace is maniacal down at the Printers.  Every lawyer wants their job done first, and wants them yesterday.  And Eddie goads his guys with a firm hand to do just that.  And Eddie, while a fierce boss, is gentle as a lamb.  And the four guys are a team, aren’t they!
Enter Jason Spade, con man, hated adopted son of Miles Spade, senior partner of O&M, a scum of a man.  He works at the firm as a lawyer, but hates the job, the firm, and especially his father.  So when Jason befriends Rich and approaches him with a most illegal – and profitable – suggestion, Rich asks the other Printers what they think.  What can they think – they need the money, and they trust Rich and Eddie.  Everyone’s in.
And each man has a set of three numbers that open up the account offshore where they will stash their huge profits.  But no one knows anyone else’s number.  This way, they all have to enter their code to access the money.
424 281 718 666 911 – the numbers that will strain the lives of the Printers to the max.
Taut, tense, cyclonic, and brilliantly plotted, Santora baits his readers and his characters – and records the disaster that follows. The ending – well, let’s just say it will spin your heels!
Fifteen Digits

is available for pre-order at Amazon.com and will be released on April 24th.