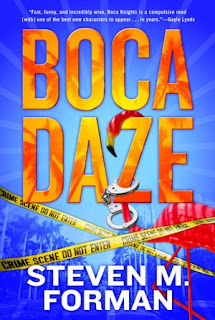 Author: Steven M. Forman
Eddie Purlmutter is the saint of South Florida.  A retired cop from Boston, criminals fall into his path like snakes in a rain forest.  After a newspaperman dubs him the Boca Knight, Eddie, his partner Lou Dewey and Lucy (Lou’s girlfriend) decide to go into private investigation, and call themselves the Boca Knights Detective Agency.
But Eddie is no kid.  Early sixties, with gorgeous girlfriend Claudette half his age, Eddie’s beloved Mr. Johnson sends him to the doctor – for Viagra.  As Eddie and his agents thrust spin after spin on every man’s dream, Forman sends every stereotype his way. Hilarious, irreverent, full of social commentary that spills the beans, Eddie, Lou and Lucy crash their way through the lazy slosh of crime in Boca Raton, retirement heaven – and hell.  For Eddie, who has a heart of gold, and Lou, his rehabilitated computer hacker genius partner, love an underdog.  As cases fall into their laps, Eddie, Lou and Lucy risk their lives in their madcap dash to solve cases.
Doc Hurwitz is an old “acquaintance” of Eddie’s from his Boston cop days – and Doc was on the wrong side of the cops.  He calls Eddie when his beloved granddaughter Shoshanna dies from an overdose from the pill mills that are legal in Florida – and rampant with illegal prescription drugs like Oxycontin, Vicodin, Percocet and Xanax.  Doc has a fistful of prescriptions found on Shoshanna’s body, with no proscribed name on them.  Shoshanna has become another victim of the pill mills, and Doc wants them shut down.  He asks Eddie to close the clinic and put away Dr. Patel, the doctor who gave Shoshanna the prescriptions.  But the clinics are legal in Florida.  So Eddie, Lou and Lucy chase the past for clues.
Then Lou discovers a Ponzi scheme, with B.I. Grover – B.I.G. Investments at its head.  Many of Lou’s friends are innocently investing in the scheme to the tune of a 20% investment return – including his dentist.  But they have no idea that the money pouring in is a pyramid scheme and that the scheme will crash any minute – Grover is taking the money to his bank only.  The rush is on as Grover sends some hit men to kill Eddie – and Eddie, Lou and Lucy almost die, but recover in time to stop the scheme.
Jerry Small, the South Florida news reporter who first named Eddie the Boca Knight calls next.  A homeless man named Weary Willy has been found dead with his head bashed in. BUT he was moved after he died.  While investigating the case, Eddie meets Three Bag Bailey, another homeless person, and she becomes Eddie’s accomplice as they search for Willy’s killer – and almost die in the process.
Throw in Mad Dog Walken a dangerous street drug ganger, the SEC, the FBI, more Viagra than Eddie can handle, Bailey’s sister Kayla, Chief Burke, the local head of police, and a cast of characters so madcap that it’s hard to keep them straight, and you get the gist of Boca Daze.
As Steve Forman takes a shot through Eddie’s scope at homelessness, drugs and financial ponzi schemes while racing through the stratosphere of baby boomer hell, we race to keep up with him, Eddie and his detective agency buddies.  Hilarious, rowdy and rip roaringly tender, macho Eddie thrusts his heart right through each case he takes on and why not?  After all, he’s the Boca Knight~!  A+
Boca Daze

is now on the shelf of your favorite bookstore.

4.5Review by Broad “A” – Ava We received a copy of this title for our book review. All opinions are our own.
« Coming soon: John Carter
DVD Reviews: In Time »