You are here: Home / Fun / DVD Reviews: To Kill a Mockingbird 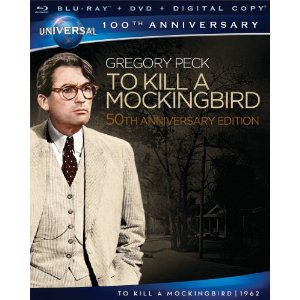 “To Kill A Mockingbird” is truly a much loved and critically acclaimed film. It is a perfect portrayal of childhood innocence, racial prejudice, moral tolerance and courage. The film is so wonderfully done that the audience actually feels as if they were in Alabama during the 1930s. This is a must see for anyone of any age. However this picture came at a time of great change for film in storytelling and in visual media and it feels a bit vanilla compared to other features of this year (Lolita, Jules et Jim, Whatever Happened to Baby Jane and Lawrence of Arabia).

Based on Harper Lee’s Pulitzer Prize winning book of 1960. Atticus Finch is a lawyer in a racially divided Alabama town in the 1930s. He agrees to defend a young black man who is accused of raping a white woman. Many of the townspeople try to get Atticus to pull out of the trial, but he decides to go ahead. How will the trial turn out – and will it change any of the racial tension in the town?

The film, while unassuming and for the most part understated, is also devastatingly on target with all of its performances. The kids here are simply a revelation, natural and unforced, with perfectly nuanced turns and often-exuberant moments of childlike wonder. But it is of course Gregory Peck who anchors this film in its undeniably strong moral center. Has there ever been a more perfect marriage of actor and role than Peck as Atticus Finch?

I really enjoy this film, it is simple easy to watch and very much like the source material. Honestly it does not need to be any spicier. I retract my earlier comments.

To Kill a Mockingbird is part of Universal’s well publicized 100th Anniversary promotional push to revisit many of its storied films, restoring and remastering them for home video release (not all of these legendary films will receive Blu-ray releases, unfortunately). This new Blu-ray has been sourced from high res scans of original 35mm source elements and the results are simply gorgeous. The clarity and precision of the image is breathtaking at times, with beautifully modulated gray scale, deep, rich blacks and piercing, though never blooming, whites. It is one of the best looking blu-rays I have ever seen.

I’ve seen the film countless times, and it has the same effect on me, certainly a good indication of just how emotionally powerful the film is. How many films can you think of that lose little if any of their emotional resonance upon repeated viewings? To Kill a Mockingbird is one of that rare breed of films which seems timeless even as it precisely recreates a very specific time and place.

Overall: 5 out of 5 (no silly tricks today