You are here: Home / Fun / DVD Reviews: The Apartment 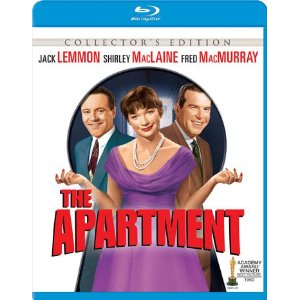 This is easily one of my favorite films ever.  No questions about it.  I watch it a few times a year it never fails me and it is so freeking good.  Honestly if you have never seen this film go and watch it now. Buy 10 copies and watch them all in a row.  The Apartment is the most amazing, relatable, progressive and sympathetic film made in 1960 (arguably the best year for film).  It’s also a real tear-inducer. I’m not going to lie. The Apartment gets me every time. I’m not sure if its the sad Christmastime setting, Shirley MacLaine’s heartbroken performance, or the fact that Jack Lemmon’s character is just so unimpeachably swell–it’s probably all three–but the Oscar-sweeping romantic comedy never fails to get my waterworks going.
Synopsis Time!
C.C. Baxter, insurance clerk and only a face in a crowd of 30,000 employees, has a little problem: He can’t use his own apartment. Since he once lent out his key to one of his superiors and his mistress, this custom has spread ever since. Now, different superiors from different departments take his place for their tête-à-têtes.

That’s really is all I can say without giving too much away.  Everything about this movie is great!  From the acting to the very progressive story this film is not to be missed.  Billy Wilder perfected the style of satirical filmmaking. In The Apartment, he touches a lot of subjects. The movie deals with adultery, suicide, loneliness, and corporate cutthroats. The movie won five Academy Awards, including Best Picture, but surprisingly, no acting Oscars. I have seen many romantic comedies, and while many are good, most of them do not have the same heart and warmth as The Apartment. It is in my list of top ten favorite movies because it entertained me, inspired me, and showed me how to live… human-wise.

The Apartment distinguishes itself from other comedies of the day with a black and white widescreen image that’s rich and shadowy. MGM has definitely done LaShelle’s cinematography justice here, giving us a completely satisfying 1080p/AVC-encoded transfer.  The Blu-Ray looks great!
Unfortunately the Blu-Ray lacks serious special features.  We have an ok commentary track with Bruce Brock.  A half an hour behind the scenes feature that is kind of weak, and a feature with Chris Lemmon talking about his father.
Over all this is the one of the best films ever made and certainly one of my favorites (depends on the day but I usually will answer this film).  This movie fires on all cylinders it is well paced, the acting is amazing,  it is visually stunning, and the script is one of the best ever.

can be purchased wherever you usually buy DVD and Blu-Rays.