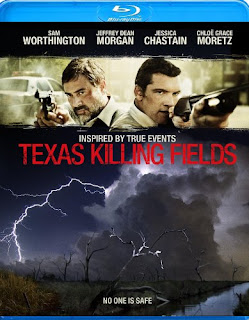 Texas Killing Fields is the feature-length movie version of all of the alphabet soup crime scene television shows that have dominated the airwaves of the past decade or so. It’s the same old story of detectives on the case, dead bodies, a parade of suspects, and a little girl in peril, all unmercifully dragged out to twice the size of its small-screen counterparts and with no more flair, purpose, or scope than may be found in any random episode of any number of like-minded television shows.


It goes a little something like this – Detective Mike Souder (Sam Worthington) is a local Texan police officer who believes extensively in only working on cases in his own town’s jurisdiction, while his partner Detective Brian Heigh (Jeffrey Dean Morgan) is a former New York City police officer who can’t but help others in their time of need. Whether it is a young girl named Anne (Chloe Moretz) who resides with an abusive family, or Det. Souder’s former wife Detective Pam Stall (Jessica Chastain), who polices a nearby community in which a Texan oil field known as the killing fields is situated. When Pam requests the help of Heigh in the recent disappearance and murder of women within the confines of the killing fields, he reluctantly obliges, despite the objections of his partner due to their own case against two low-life pimps who are systematically kidnapping and forcing teenage girls into a life of prostitution. What follows, is two differing journeys as both men attempt to bring the guilty to justice through their own, loose methods.

Aside from the acting and the lack of characterisation, the other glaring flaw of ‘Texas Killing Fields’ is the complex narrative at the heart of the picture, while Souder is investigating Rule (Jason Clarke) and Levon (Jon Eyez) over the kidnapping and forced prostitution of runaway teenage girls, Heigh is helping Detective Stall investigate the killing fields, and the story of a neglected teenager in Little Anne is also thrown in their for good measure. With so many different narrative streams taking place all at once it is easy to become confused about what is exactly taking place on-screen, who is being interviewed and what criminal case they are actually discussing or investigating. On more than one occasion the editing compliments this confusion by cutting needlessly to a scene or character unrelated to the previous sequence without any standing or context. This constant juxtaposition between cases also ceases any emotional connection to any of the characters or their plights.

The blu-ray looks good (not great) and sounds excellent. The special features are nothing to write home about with just a commentary. Texas Killing Fields really tries to be something of value, but it falls short of that goal in most every regard. Rather than something novel and exciting, the film is just a double-long rehash of the tired crime scene genre. It lacks a soul to be sure, though its heart is often in the right place.

is available at DVD sellers.