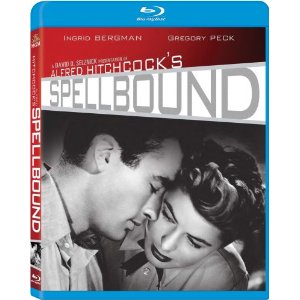 I’m not going to lie I kind of think that Hitchcock’s American work is not as good as his previous work in Canada or the UK.  However this is one of the better Hitch & Selznick features.   This is not the 39 Steps or The Lady Vanishes it is much more Hollywood.
Synopsis Time!
The head of the Green Manors mental asylum Dr. Murchison is retiring to be replaced by Dr. Edwardes, a famous psychiatrist. Edwardes arrives and is immediately attracted to the beautiful but cold Dr. Constance Petersen. However, it soon becomes apparent that Dr. Edwardes is in fact a paranoid amnesiac impostor. He goes on the run with Constance who tries to help his condition and solve the mystery of what happened to the real Dr. Edwardes.
While I wouldn’t include ‘Spellbound’ in my top five favourite Alfred Hitchcock movies it’s still wonderfully entertaining. Of course it had dated badly in some ways, but not enough to spoil a modern viewer’s enjoyment. Psychoanalysis was still quite a cinematic novelty at the time, but this means that we have to put up with an awkward opening sequence, complete with “explanations” on the screen, and a few pretty hokey moments throughout, but hey, I can live with that, and the amateurish filmed skiing scene. These few flaws, quite a rarity for Hitchcock, are still small potatoes. The legendary Salvador Dali designed dream sequence allegedly used very little of the great surrealists outlandish ideas, but even so it’s striking and memorable. I also really enjoyed the inventive score by Miklos Rozsa, which utilized the eerie sound of the theremin, later used in the science fiction classic ‘The Day The Earth Stood Still’, and The Beach Boys psychedelic pop masterpiece ‘Good Vibrations’. Now the best thing about ‘Spellbound’ and what really makes it into a wonderfully entertaining mystery/romance is Ingrid Bergman and Gregory Peck. These two Golden Age superstars are both absolutely wonderful individually, but together they are magical, and one of THE great romantic couples in movie history. ‘Spellbound’ may not be Hitchcock’s very best work, but I still highly recommended it. I can’t see how anyone could not enjoy it.
Unfortunately the audio and video is not nearly as good as To Kill A Mockingbird but they are still good enough.  However there is a surplus of special features.
Spellbound is a rather odd film that needs to be seen.  I now does feel a bit dated and the plot has been used a few times recently but it does work here too.  If anything just watch it for the score and dream sequences.
Spellbound [Blu-ray]

is available to purchase for your collection of classics.