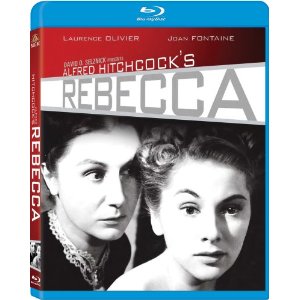 Nearly 20 years before “Vertigo”, Alfred Hitchcock made another film featuring romantic atmosphere, social misfits, a possible ghost, and male-female frustration. Except in “Rebecca’s” case, it was from the woman’s point of view. So you could call this a chick flick version of Vertigo?

The secret to truly appreciating this movie is to get through the first hour or so of it. To be frank, that first hour is less than riveting. We find ourselves following the romance and the early part of the marriage of the wealthy and lonely widower Maxim de Winter (Laurence Olivier) to his new young bride (Joan Fontaine.) There really isn’t much meat to this part of the story. It’s a bit of a rich meets poor love story, as the young bride finds herself in a romance with this man who was quite above her socially, and it’s even got a bit of humor to it, as we watch the young woman’s employer Mrs. Van Hopper (Florence Bates) try to ingratiate herself with Maxim. It’s a pleasant enough (although not exactly engrossing) love story for a while, and after their return to Maxim’s Manderlay estate it still seems to be little more than the challenge of the new Mrs. de Winter (whom I don’t remember being named) to overcome the reluctance of the servants – and especially Mrs. Danvers (Judith Anderson) – to accept her, since they appear to have been fiercely devoted to the late Mrs. de Winter (whose name was Rebecca.) Yes, Mrs. Danvers is an unusual, and therefore suspicious, character that has more than a bit of mystery about her, but still this really doesn’t seem to be going anywhere very fast.


Once we’re through that first hour, though, plot twists start to emerge. Maxim starts to pull away from his bride. At this point, director Alfred Hitchcock manages to turn what had been a rather empty story into a pretty good suspense/thriller. In that last hour, Hitchcock builds the story brilliantly, so that it gets progressively more suspenseful, and by the time the shocking final scene comes along, as a viewer you’re absolutely hooked.

The audio and video are good enough here and vastly better than any I had seen before for this movie. The special features are good enough we have a commentary that is informative, a making of featurette that is good, a featurette about the author of the book, and some screen tests with the actors. We also have a few versions of the radio play one even by Orson Welles!!!!

Those expecting a bristling, thrilling experience in Rebecca may find themselves perplexed, at least on first viewing. This is one of the slowest of Hitch’s films, suitably novelistic considering its source elements, but also a film that seems tonally at odds with itself.

is available for your collection now.