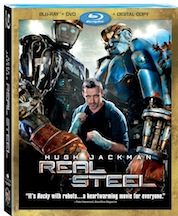 Growing up I was a huge fan of Stallone. I taped all his movies off HBO. I’ve seen Cobra, Rocky, Cliffhanger, Demolition Man and Over the Top hundreds of times. My expensive film school education tells me that these films are terrible, but I can’t help but love them because they are so much fun. My review of Tree of Life reminded me that film is an art form, this week Real Steel reminded me that film is fun.

Real Steel was the film that Stallone failed to make in the 1980s. I’m sorry that’s not true, this film is a combination of Over the Top, Rocky and Transformers. In fact Stallone made this film twice and it rocked both times. Here Hugh Jackman takes over the Stallone role. It’s kind of great. I’m not going to get into the plot because a 2nd grader could probably guess the entire plot from the trailer.

Hugh Jackman’s films never really played to me, for a brief time in 2006 he had a string of good movies (Scoop, The Prestige, The Fountain) but before and after he never really showed any talents. Jackman has now shown us that he can play a character that is not Wolverine (a character and film series that I HATE). Real Steel showed me that Jackman is powerful and compassionate as he believably transforms into the hero. He played all of the clichés that I grew up on perfectly. Most will think this is a bad thing, but his character really felt like I was watching a hero from an Amblin film (Zach Galligan in Gremlins or Sam Neil in Jurassic Park). He owned this role.

Honestly there is not much to this film, but who cares, I clapped at robots punching each other for two hours. I felt like an 8-year-old again, wearing out my VHS of Over the Top. The filmmaking is pretty decent. Well-shot scenes. The CGI robots look great. The performances were good. Dakota Goyo is a bit charming. Chemistry with he and Jackman shines through the film. This film looks and sounds great on blu-ray.

This is the kind of movie you catch on HBO and get caught up watching the whole thing. This movie proved to me that Hugh Jackman could carry a film alone. The film is enjoyable from the first frame to the last. With a special mention to the first few scenes, which were great.