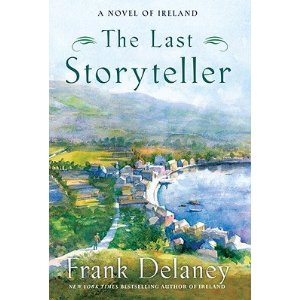 The Last Storyteller: A Novel of Ireland

Author: Frank Delaney
Mesmerizing, terrifying, redemptive – Frank Delaney creates a maelstrom as he memorializes Ireland through the eyes his character, Ben MacCarthy.  Delaney’s previous novel, The Matchmaker of Kenmare, gave us the beginnings of Ben’s story.  The Last Storyteller passions Ben into 1950’s Ireland, and echoes his story in the miasma of the country he loves.  Ben counters his destructive acts within the humanity of the myths and legends he collects, and comes out the other side in The Last Storyteller.
Ben works for the Folklore Commission of Ireland, traveling and collecting the stories of the grand old storytellers.  In brash lusciousness of language, Delaney follows Ben as he tells his children of his story, and makes it the story of Ireland.  As The Matchmaker of Kenmare ends, Ben travels from Ireland to Florida, and confronts Venetia, who tells him that they have twins, a boy and a girl, Ben and Louise.  As Venetia implores Ben to hear her story and meet his children, Ben walks away, lost in his tumultuous rage and stagnant fears.
The Last Storyteller, Delaney’s new novel, pursues Ben’s life as he continues writing down his story for his children.  Ben’s mentor at the Folklore Commission, James Clare, has just died, leaving 40 year old Ben rootless.  Ben has also picked up a circumspect acquaintance, Jimmy Bermingham, a gun runner for the newly formed IRA (1956), who has coerced Ben into running guns for the cause.  And Venetia has married a violent performer who beats her.  As a counter to his country’s political drama, Ben finally meets John Jacob O’Neill, the great storyteller of the Irish legends, and continues to visit O’Neill who guides him.  Through O’Neill, Ben finds his redemption.  For Ben’s life, dismantled and vaporous as a shooting star, unravels by the second.
As Delaney juxtaposes Ben’s life of paranoia, fear, rage and impotence against 1950’s Ireland, we watch as Ben and the people of Ireland find their passion and redemption.  Ben’s mentors are legendary men and fools, and he follows both as they lead, sometimes surreptitiously, sometimes dangerously, across the tundra of Ben’s obsession with finding Venetia and keeping her.
If ever a writer captures the victimization of Ireland, the battle for victory over England, the Karpmann Drama Triangle of inter-relationships, it is Delaney.  Philosophical, passionate, yet lost, Ben struggles to act instead of follow.

“Mythology,” states Delaney “was a bible ever before there was a Bible.”

Do not read Delaney if you expect ease – do not read him if you expect simplicity – read him only if you have an eye for the Irish history in all its nuances borne by characters flawed, mellifluous, scarred and noble.  This is Delaney’s genre, and Ben is his conduit.
As Ben finds his spiritual path as a storyteller, he atones for the man he killed and the three men he had killed.  He finds Ireland again, and redeems itself in her people and stories.  And he finds himself in Venetia, Ben and Louise as he counters his rash passions with mature emotion and self deliverance.
A visual sweep as complex as The Thorn Birds, Delaney encapsulates the Irish voice.  I simply could not put the novel down.
The Last Storyteller: A Novel of Ireland