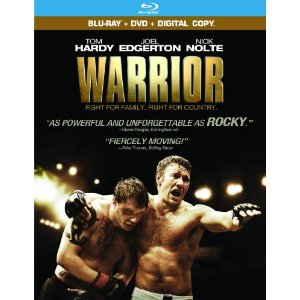 Every year or two we have a Rocky clone with a different sport.  I’m cool with that formula, as it usually makes for a fun movie.  I try not to read reviews before going into a movie but since this is a strict formula film I decided it was OK because I knew the beats already.  I heard great things about Warrior… hearing the acting was amazing.  Warrior is one that I almost caught on a theatrical run but decided in favor of The Debt that day. Now I am glad that I did.

Two brothers face the fight of a lifetime – and the wreckage of their broken family – within the brutal, high-stakes world of Mixed Martial Arts (MMA) fighting. An ex-Marine haunted by a tragic past, Tommy Riordan returns to his hometown of Pittsburgh and enlists his father, a recovered alcoholic and his former coach, to train him for an MMA tournament awarding the biggest purse in the history of the sport. As Tommy blazes a violent path towards the title prize, his brother, Brendan, a former MMA fighter unable to make ends meet as a public school teacher, returns to the amateur ring to provide for his family. Even though years have passed, recriminations and past betrayals keep Brendan bitterly estranged from both Tommy and his father. But when Brendan’s unlikely rise as an underdog sets him on a collision course with Tommy, the two brothers must finally confront the forces that tore them apart, all the while waging the most intense, winner-takes-all battle of their lives.
There was absolutely nothing new here.  That’s OK; I don’t mind, I was in the mood for a good formula flick.  Unfortunately I could not attach myself to the movie.  All of the clichés just went too far.  The acting was good enough – Nolte’s off the wagon scene made me laugh out loud.  This film is what happens when a screenwriter writes with an “Intro to Screen Writing” book by their side.  All of the characters are cardboard cutouts with “personal demons.”
The direction was cheap and so was the audio quality.  I found that I had to put the subtitles on because the characters were obviously nowhere near any microphones.  The video quality is intentionally grainy because of the gritty story (cliché #175 in this movie).   This film keeps getting compared to The Fighter from last year.  The Fighter is a vastly superior film.
Ok this movie is not all bad Joel Edgerton is good with a very balanced performance.  The fight sequences here are among the most viscerally exciting in recent memory. If the film opts for a bit of a feel good ending, that is part and parcel of the hackneyed structure of this genre to begin with.  And the special features are great too.
•         Full Contact: Feature Length Enhanced Viewing Mode – Really dug this.
•         Feature Audio Commentary with Filmmakers and Actor Joel Edgerton – meh
•         Redemption: Bringing Warrior To – Another generic making of feature.
•         Cheap Shots: Gag Reel –  Did not watch
•         Brother vs. Brother: Anatomy of the Fight – featurette that deconstructs the climactic fight sequence.
Over all this film was just wrong for me.  This film is for people who enjoy the film Taken.  The melodrama just seems too artificial for me but the saving grace is wonderfully shot fight sequences.  It’s just not for me but maybe for you.
Warrior

can be purchased at Amazon.com among other places.
Ratings are based on a 5-star scale
Overall:    2 too many punches to the head out of 5

« DVD Reviews: Rise of the Planet of the Apes
Book Reviews: The White House »